The rising cost of fuel, tolls and parking is costing me $90-$100 per week to go into work. In contrast, public transportation would only cost me around $40 for unlimited travel. That is a sizeable chunk of change!

In the past, I had used public transportation to come to school or work, but the overall cost at the time was more expensive than driving, and not as convenient! The train station was not near, busses took forever, and the cost was about the same as it is now. Back then I had no tolls (and when I did it was $2/day), gasoline was $20 to fill up for the week, and parking was $4/day for a grand total of $40-$50 per week. The speed/cost factor did not dictate a switch to public transport.

Now, on the other hand, it does. If this goes well, I may also trial it for the fall semester.
Ο Φοβερός
Comments

Sunday, Jun 29 2008, 18:08 Internet Permalink
I gotta say that I am a teeny bit upset at the waste of bandwidth that is taking over the internet these days. Here are some of my least favorite bandwidth wasting types of activities:

You go to NBC, you click to see a small clip from Last Comic Standing, maybe 4 minutes in total length. Before you can see each mini clip, you HAVE to watch a 30 second add. Seriously?!

You go to a news site, and two thirds of the page is covered in ads. OK, I can deal with it (somewhat) if they are text ads, but those annoying animated GIFs (or worse flash animations) are distracting, annoying and taking up my bandwidth!

You go to that same news site, and they have a flash movie running of the recent (insert film name here) flick, in muted mode. Why do I need to see this? If I want to see a trailer of the movie, I’ll head over to quicktime.com and see it! I don’t want to have it wasting my screen real estate and my bandwidth!

These ads are getting annoying!
Ο Φοβερός
Comments

The erosion of customer service: the water heater story

Saturday, Jun 28 2008, 18:07 Home Permalink
I love doing things online. I love to order my pizza online, and pay online. I like to send off emails to contacts rather than calling. Recently I discovered that I like online classes (at least up to now)…but there are some times that you want some face-to-face interaction with people providing a service!

As was mentioned before, my water heater died. It wasn’t flooding the house or anything, so we looked at a few different models online, saw what people were saying about them, online, and tried to find a plumber, online (no customer ratings for plumbers in my areas online though).

We looked at Home Depot online and decided to tentatively go with them since they hire local contractors. We decided to NOT order online, so that we may speak to a Home Depot associate about it and arrange things face to face. After all, major home repairs do require more TLC than ordering a pizza!

Well why did I drive in here, I thought to myself, and why would no one at my local store take my credit card, charge me for the water heater of my choice, and then act as an intermediary between me and a contractor to get me a quote? Is it that hard?

I humored them, sat down for 3 minutes, fiddling with the system - none of the options were “buy a hot water heater” so I hit the button for a customer service representative. I was on hold for 30 seconds when I decided to give up, and go home. What kind of customer service is this?

Now I know that I like to do most things online, but I don’t want any misunderstandings when I am about to pay $800 or more to replace my heater! According to our research there are a number of complaints against Home Depot’s contractors, so I wanted a real person to explain to me, face to face, exactly what the costs are for this kind of job. I don’t want to purchase online, I don’t want to call someone, I just wanted an associate to ring me up, and help me get a quote and arrange for installation. Is that too much to ask in this i(nternet)Age?
Ο Φοβερός
Comments

Saturday, Jun 21 2008, 18:15 Entertainment, VideoGames Permalink
Who remembers Alone in the Dark? No! No! Not that awful Uwe Bohl film! The DOS (and subsequent Mac Port) Alone in the Dark! I bought the game back in 1995 (or was it 1996?) I still have the CD-ROM somewhere with my antique software holdings. I remember playing the game on my Performa 635CD on lazy summer afternoons. The video bellow shows how choppy the graphics were, but there was nothing scarier at the time than having a zombie come after you and you have no place to run and hide!

Maybe I should get DOSBOX to get reacquainted with this game…

Debating whether to get Patapon now 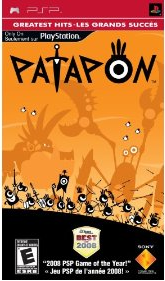 I’ve been hearing about Patapon on the 1Up Yours podcast for a while now, so I decided to do a YouTube search to see a bit of the gameplay. Every review I’ve seen gives the game thumbs up, and on Amazon it’s only $20. Seeing the video on YouTube made their silly little pata-pata-pata-pon song stick in a mental loop (I think I’ve been rick rolled).

Here is some wiki information on the game: CLICK

Also, the amazon product page if you are interested: Patapon

Wednesday, Jun 18 2008, 18:09 Entertainment, Television Permalink
OK, so the television season has been over for a few weeks and we’ve now found out which shows have been orphaned, in other words cancelled. Here are four shows that I wish would get picked up by another television station:


Jericho: Network: CBS. Post nuclear USA. If you haven’t seen it, you should! It’s a season and a half of great suspense. The end of the second season leaves us with the Eastern state alliance (remnants of the ‘old’ USA), the Independent State of Texas, and the Western alliance (run by corporate interests who instigated the attack). I would be interested to see what happens next! Aren’t you?

Moonlight: Network: CBS. It follows a relatively young vampire (80 year’s old? I think). In any case, he is a private detective, has a fling with a girl he saved from the crazy vamp that turned him, so in essence he is like Angel. Good show.


New Amsterdam: Network: FOX. The show follows a Dutch man who has lived in NYC since it was a Dutch colony who’s been given eternal life, until he finds his soul mate, at which point they can live until death do them part. It’s a good show, it shows him being frustrated at not dying, seeing his kids die, and former loved ones, and he longs to just grow old with that someone special. I personally want to find out if he ever finds that special someone.


Aliens in America: Network: CW. My final pick follows a Pakistani exchange student in Wisconsin. The strength of the show is not only showcasing the cultural differences and similarities between Americans and Pakistanis - or non Americans (alien #1), but also the awkwardness of being in high school – the clicks, the classes, the popularity contests (alien #2). The show also does a good job at showing the hypocrisy of human nature (smoking cigarettes when you are not supposed to, saying that you are a good Christian but hating going to church, and so on). The show tanked in ratings and I really wonder why. I wish someone else would pick it up


There are two other shows that got the can, Cavemen and Carpoolers. I never tuned in specifically to see these shows, but I did enjoy watching them two or three in a row on ABC’s website. I really liked both of the shows and wish that they would resurrect them as regular 20 minute sitcom episodes, but available online and on DVD only.
Ο Φοβερός
Comments

Tuesday, Jun 17 2008, 18:07 Entertainment, Television, Ελληνικά Permalink
OK for those who don’t read (or speak) Greek, the show is called “Greece’s Children”, it’s sort of slang for the young people that are military service. The show is about these slackers who serve in the Greek Air Force, their commander, the local snitch, and of course the General that comes in on surprise inspection visits.

The show is of course a comedy staring Yannis Bezos (not related to Jeff Bezos of Amazon, as far as I know), who also starts in a few other classic television favorites of mine. This is a series that I would buy on DVD, unfortunately Greek series on DVD are something that have not caught on in Greece.

Need to do a site redesign

I need to do some RapidWeaver cleaning out. I’ve got some obsolete themes from the RapidWeaver 3.1 era that I downloaded a while back, and that have been orphaned by their creators. I like the themes, and I wanted to update them for rapidweaver 3.6 and 4.0 and redistribute them (for free of course), but I simply have not had the time.

I think my quest will start with pulling these themes out of my rapidweaver folder so that I no longer get the obsolete themes warning, and them slowly decide which themes I may want to use in the future, and which ones I probably won’t. I think I need to create a visual catalog of each theme, that way I can safely put them out to pasture, but still keep them the catalog around in case I need to pull them out of retirement.

The other dilemma is the whole 2.0 thing. I’ve created accounts on various 2.0 sites, and I am debating whether or not to create links on this page, and if I do create links, what is the best design to do this?

Does it run RapidWeaver?

Sunday, Jun 15 2008, 18:18 Technology Permalink
Over the past few weeks I’ve been debating the purchase of a new laptop. No, my PowerBook G4 is still chugging along, but there is something to be said about doing your homework and research on your sofa, wirelessly, rather than being tethered to an Ethernet cable near your router.

I’ve been looking at the Eee PC, and the ubuntu subnotebooks because my N800 experiences this far have been quite positive and I am willing to give linux a try (again). No, I am not giving up on the Mac, but spending $1700 on a tricked out MacBook is quite a lot compared to spending that money on a $500 subnotebook. My needs are simple: web browsing, office applications, IM, video (youtube, divx, etc) and RapidWeaver! I can’t see myself going back to another website creation tool having used rapidweaver for the past few years, and unfortunately it’s only a Mac product.

I am keeping my fingers crossed for a Mac subnotebook for the masses. The MacBook Air is nice, but I don’t want a second computer, and I don’t want to spend more than $700.
Ο Φοβερός
Comments