A blog about life in general, in as many languages as I can manage. Ενα ιστολόγιο περι ζωής, πολυγλωσσο - σε όσες γλωσσες εχω μεράκι να γράψω.
Monday, May 31 2010, 14:07 Entertainment, Opinion, Television Permalink

This has been Finale Week (I guess with the end of the semester come and gone I now have more time for entertainment ;-) ) In any case I decided to make all of my season and series finale comments in one bigger post. Yes, it's filled with spoilers so don't read if you don't want things spoiled ;-)

NCIS & NCIS: LA
Honestly these two shows are like a soap opera, who cares about a season finale? It's all about the murder mystery (or spy mystery) of the week. Of course the season finales of both NCIS

decided to focus more of character development than a murder mystery (which seems to be the norm for this type of show). In any case, NCIS focused on Gibbs' background and his rules (which apparently are not in numerical order) and NCIS:LA focused a tiny bit on Callen's background (which is still shrouded in mystery after the finale). Pretty interesting. I was only watching NCIS:LA (despite it kinda sucking in the beginning) because of the NCIS name (and I also liked JAG), but after these last two NCIS:LA episodes I think I will be coming back in the fall!

House
Just like the NCIS series, for me House

is more of a medical mystery of the week type of show. Sure there is personal character development, but I tended to ignore it mostly (the Chase-Cameron marriage/romance/drama was really annoying). In any case, House writers decided to focus on character development - namely House's character. I was surprised by the turn of events in the season finale when House admins his passion for Cuddy - and Cuddy saying no to marrying what's-his-name - the detective that House hired and that eventually cohabited with Cuddy.

FlashForward
To be honest, initially I didn't know if I would like FlashForward

but it turned out to be a great series! It's too bad that it was cancelled! (although they did leave the door open for a second season if the show got picked up again). So what happened? That doctor who had cancer met his flashfoward girl (awesome!), the hospital volunteer (and babysitter for the Benfords) met her savior (satisfying ending), the viewers find out who the FBI moles are, the whole FBI building blows up and Benford jumps out of a window toward a helicopter as the building explores (satisfying in a Die Hard way) and a few other things. In all the finale for this series was satisfying - if the series were a restaurant this season would have filled you up, satisfied you, and you would want to come back for more. The finale was way better than the lost finale!

was the sequel to Life of Mars

. Life on Mars had 2 seasons and Ashes to Ashes wrapped things up in 3. I was really hoping for a sequel series that took place in the 90s but the way they wrapped up the series I guess that's not happening. The big reveal was that Gene Hunt was some sort of Angel Cop there to help coppers who died in the line of duty move on (where they're moving to is anyone's guess). This means that DI Drake was indeed killed by the gunman at the beginning of the series and she can't get back to her family. This was kind of a bummer (I was hoping that Drake would eventually wake up) but this ending was quite good- BETTER than LOST's ending for sure.

Chuck
For me Chuck

sort of falls into the NCIS/NCIS:LA/House category: yes there may be an overarching plot, but I really enjoy each episode as the "spy mission of the week", so there wasn't a ton that blew me away in the finale. I liked it as a Chuck episode, but I really didn't expect to be blown away by it. I's kind of a bummer that Chuck's father was killed off but on the plus side Morgan is getting more involved in the spy game which is promising for future humor.
Ο Φοβερός
Comments

Thursday, May 27 2010, 08:28 Entertainment, Television Permalink
I came across this college humor video on LOST's 100 unanswered questions:

Anyone got answers? :-)
Ο Φοβερός
Comments

Seems to be a Finale type of week on the blog ;-) Last night (yes a day later) I watched the series Finale of 24

on hulu. After a somewhat disappointing series finale for LOST

(yeah, I know - there are people out there that love it - can see why, but I still feel it was mediocre - anyway...back to 24

) I was a bit afraid that the 24 series finale would not live up to expectations - after all this last season took a very long time to get revved up and get into the action (it eventually got better but by that time it was cancelled).

So what did I like? Well for one thing the President finally woke up and saw that the cover up was wrong, owned up to her mistake. Jack is not dead (I would have been upset if Jack died), but of course Jack is now back to being a man on the run - again! The Chinese don't like him, African warlords don't like him, the Russians don't like him - is there anyone that likes him? Maybe he'll take refuge in the IRK...who knows?

Tuesday, May 25 2010, 17:58 Entertainment, Opinion, Television Permalink
Because Comcast doesn't provide us poor souls on the basic (local only) plan with HD, I decided to wait a day and catch the LOST

series finale on Hulu. I will do my best to not post any spoilers for those who have not seen it yet.

Personally I had some high hopes of getting some answers about the island, but as my RSS reader pointed out LOST

provided answers to some questions, and left others unanswered, while providing for discussion for years to come about what it all meant.

Personally I found the finale to be a big bowl of "m'eh". It seems to me like the writers really tried to just tie things up by putting the pedal to the metal as far as time goes and having the equivalent of zooming ahead so many years to some inevitable end. Don't get me wrong, I didn't hate the ending, it was just sort of expected and they went for the cheap tear-jerker response as opposed to something more cerebral, or "a-ha", or I-don't-know-what. For a series that billed itself as a "WTF?!?!?!" response at the end of most episodes, this ending just seemed expected.

Perhaps a spin off is in order, let's call it FOUND...
Ο Φοβερός
Comments

Dead Snow - Campiness to the max!

Monday, May 24 2010, 17:35 Entertainment, Films, Horror, Humor, Video Permalink
OK, so this past week the wife decided to try out Netflix. I've been avoiding Netflix because I don't want yet another recurring charge on my stack of bills - somehow recurring charges are there, but I tend to not use the service. Seeing how summer is upon us, I won't be having any courses to keep me late (or require me to do homework) and that most people will be hitting our public libraries for entertainment, a $10/month fee for 3 months doesn't seem all that bad.

We took the service for a spin this past weekend and saw a film that we've been meaning to watch for the longest period of time, but we never really found it at our public library. This film is none other than Dead Snow

as the Norwegians say).

The movie was in Norwegian, a nice change of pace - first Norwegian film I've seen actually, and it was sub-titled. The subtitles themselves needed some work, it seems like someone for whom English was not their first language did the subtitles which at times added to the comedy of the film. Don't get me wrong, this film is meant to be a survival-horror film where a bunch of medical student get attacked by Nazi Zombie looking for their gold in other words: Zombies, meet Pirates, meet Evil Dead. The film itself does make reference to MANY movie cliches, but I think that's half the fun of it. The other half are the impossible situations that these students find themselves in. The end of the movie was quite gratifying.

If you're a fan of campy movies, check this one out - you won't regret it :-)

Friday, May 14 2010, 17:23 ads, Apple, iPad, Newton, youtube Permalink
Well, I don't know what an iPad is (just kidding) but this Ad surely reminds me of the 1990's era Apple Newton Ads that I've posted on this blog before. Surely it isn't just me thinking this, the web has been talking about it for the past week (yeah, I know, with school I don't have much time to be more prompt with these things ;-) ) Have a quick comparison between the new ad (iPad) and the old ad (NEwton)


What's funny is that the following fake Newton 2008 ad came up when searching youtube for "What is Newton?"


Does it reminds you of something? It sure does look like an iPad! Life imitating art? ;-)
Ο Φοβερός
Comments 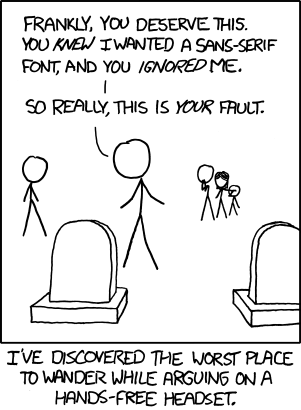 Pretty humorous xkcd comic from last week. What's even funnier is that the night before this comic strip came out I was in a class learning all about typeface ;-) Serendipity?
Ο Φοβερός
Comments

Monday, May 10 2010, 17:18 commercials, Humor, VideoGames, youtube Permalink
One of the funniest things in Metal Geat is hiding and moving in a cardboard box - as if the enemies don't notice a cardboard box moving about, or appearing out of nowhere. In any case, the Japanese commercial for MGS Peacewalker decided to poke some fun at this staple of Metal Geardom. Enjoy :-)