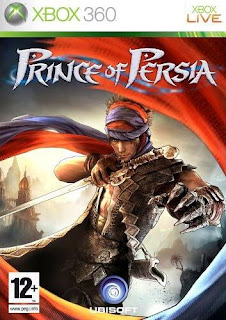 This past weekend I ended up finishing Prince of Persia

for the xbox 360.  I remember playing my first Prince of Persia game on my godmother's 286 running DOS 3 (I think) and Windows 3 for workgroups (wow!).  Back then, as this time around, I ended up killing the prince countless times! It's a good thing that I had Elika around (this time) to save me from myself.
When I got Prince of Persia: revelations

for the PSP a few years back, I expected the game to be kinda like God of War

. When it wasn't I was a bit frustrated with the game. This time around, having read a few reviews, I contrasted my PSP version of Prince of Persia to the original and I realized that yes indeed, it's not a hack-n-slash game, but rather it's an environmental based puzzle game, with a few fights thrown in.
One of the criticisms of the game (the xbox Prince of Persia

) was that Elika made the game too easy by saving you every time you fall to your doom.  Well, this being a Prince of Persia game, and having lept to my doom more than a few hundred  times, I prefer having someone save me as I leap to my doom, rather than have a splash of blood on my screen that says "you died, try again?" (which is what the PSP version does). The "You died, try again?" really cuts into game play in a negative way, and it is a bit demoralizing.
The ending was a bit of a disappointment.  I played the game, healed all the lands, took care of the four henchmen of the evil God and I imprisoned him back in his cage. That's all great, but in the end Elika dies. Since the credits were rolling I thought that was the end of the game and I was quite content with it. I figured that you can't just go through something like that and make it out alive in the end (especially since she was dead and resurrected - which caused the deadening of the lands to begin with!).  It turns out that there was more!  I had to chop down the trees that kept the evil God at bay to resurrect Elika thus freeing him from prison.
Errr..excuse me, but why did I go through ALL THAT just to have this evil God free again? This was a major facepalm moment! Of course, there is the Epilogue DLC that I can download and really finish off the story, but there is just something wrong with that... Oh well!
All things considered, it was quite a fun game.
Ο Φοβερός
Comments Last year I had an opportunity to start watching an old favorite series, Earth Final Conflict

(a Gene Roddenberry story), again. I never really got into the final seasons of the show when it originally aired because I had both work and loads of undergraduate homework to do, so by the time I got home the show was almost over.
In any case, having just finished watching the show in its entirety, I think that it was a good series gone bad.  Basically what it boils down to is this: Aliens come to earth saying that they come in peace, but they have ulterior motives (kinda sounds like V

, eh?) The aliens that come look humanoid, in the form of a standard Little Green Man (sort of like the Asgard in Stargate SG-1

, but blue and taller.) Stuff happens, there is conflict (HA!) and then some other aliens leave earth. The end.
The series started out great, I liked the cast, I liked where the show was going, but in the end it just felt (in the 5th season

) that the show was past its prime, having replaced most of the cast. In the end the original aliens that came are no more, and a new type of alien (which happens to have been on earth all along) leave earth. It sort of felt like Farscape

where there's a ship and 4 different types of aliens making their way into the great unknown).
Yes, I watched the 5th season, even though it kinda stank, and I watched it all the way to the end to find out, even though the ending was completely unsatisfactory.  It's too bad that not enough time has passed since the original airing.  I would really like for this series to be remade, sort of like how Battlestar Galactica

was remade for a newer audience.
Ο Φοβερός
Comments

Tuesday, Jan 18 2011, 17:36 Bioshock, Entertainment, XBOX Permalink
One of the games that I bought used (or cheap) over the Christmas break was Bioshock 2

. Having played, and really enjoyed, the original Bioshock

I deviced to get this game. I also decided to focus on this game (and Prince of Persia) over my vacation as I was interested in learning what happened to Rapture after the events of Bioshock.

was quite an engaging game. The game mechanics were quite similar to Bioshock, the only difference was that this time around you were taking up the role of a Big Daddy, so you ended up finding information not just about Rapture, and what happened to Sofia Lamb and the little sisters after the original Bioshock, but you also got found out more about how and why the Big Daddies were developed (it's a bit messed up if you ask me).

There are differences between the enemies in the original and the second installation. There are of course the standard leatherhead, houdini and spired splicers (as well as annoying security measures), but there are some new splicers and a Big Sister to contend with (similar to a Big Daddy but more agile). I can't believe how long it took me to work out what a Big Sister was - D'oy!

The one interesting thing, near the end, is that you can actually take control of a little sister and view the world through her eyes (by the way, why are there just little sisters? do people in Rapture not have boy children?). It's interesting that they see things as they were in 1959, before things went to hell in a handbasket, and it's only when one of the splicers goes after you that you see the decay that has occurred over the years (and the deformation of the residents of the city)

I hope Bioshock 3 solves some of these questions.
Ο Φοβερός
Comments

Wednesday, Jan 12 2011, 17:36 Greek, Greeks, Humor, youtube Permalink
OK, this video is all in Greek, but it is pretty humorous nevertheless.
It's an excerpt from Radio Arvila, a Greek comedy show (from what I gather), where the commentators are making fun of the "everything worthwhile was invented by Greeks" crowds (at least that's what I got out of it).

If you know some Greek you will laugh. If you don't know Greek, you will most likely laugh at "Autocad" and "Facepapyrus" ;-)

The younger generation, and old tech

I wonder what people will think of these items in another 20 years. It should also be noted that some of these are culturally dependent - I had no 8-track players in Greece, the only reason I knew that they existed was because of relatives that had lived in the US.

Monday, Jan 10 2011, 17:04 Humor, linguistics, youtube Permalink
I came across this video (while looking for Previews of a bit of Fry and Laurie

).
It is pretty humorous...and as someone who's just finished an MA in applied linguistics...all I could think of was theory