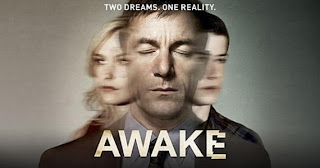 I started watching a new NBC show last week (and caught up with all 8 current episodes) called Awake. The basic premise of the show is that a family has a car accident. The father (a police detective) wakes up in a reality where his son is dead.  In that reality he goes to sleep and wakes up in a reality where the wife is dead, but the son is alive.

In essence, this guy is getting no sleep, since in one place he lives one life with his wife, and in another he lives a life with his son.  In these two universes he's got a different therapist, as well as different police partners. Each week he solves crimes by using what he learns in one reality to solve the crimes in the other, and we don't know which "reality" is the "real" one. There are some hints that something fishy is happening (his police captain is acting a bit weird), and the Son and Wife each have established plot lines when he isn't around.

This seems like an interesting concept, and I will keep watching.  Personally I think that in the end we'll find out that he is in a comma and they are both dead.  I'm sorry, but Lost really ruined me. That crappy ending has made me cynical ;-)
Ο Φοβερός
Comments

This past weekend I spent some time wrapping up Halo: Reach. This was a game that came with my Xbox last Thanksgiving (Black Friday deal). To be honest, I don't know how high on my list game would have been had it not come with my console, but I am sure glad it did!  I had a great time with it.

When I first started playing it (around Christmas break), I was sort of into it.  I was following along the plot, but my play was intermittent, so it was like watching a TV series every now and again; you end up missing plot points and forgetting things.  This past weekend I had enough time to just blast through it and the game was much more enjoyable.

What I didn't realize was that this was a prequel to Halo: Combat Evolved. By playing Reach, I've actually gotten curious to Play Halo: CE and Halo 2 before I pick up Halo 4 later on this year. I think I've gotten invested in the Halo universe plot line :-)

In terms of achievements, not that great. I finished the game with only 16/69 achievements. If I play it again on a harder mode, and if I get enough points, I can get a few more achievements.  M'eh - maybe sometime in the future when I don't have a backlog of games to play :-).  Once the game was completed, I started it again from scratch (I had just a few more points to get to make it to Sergeant) and it hit me. The storytelling in this game is great!  I had completely forgotten how the game started.  If you play the game to completion and then start a new campaign from scratch you'll notice that the game, at the beginning, foreshadows the end.  It's kind of a bummer for knowing what happened, but there are some great storytelling mechanics in the game.

I really enjoyed it!

Back to Resident Evil

I never owned a Playstation 1, but I did have a friend who did back then. Back then I was also more into platform games like Super Mario, or beat-em-ups like Street Fighter, not so much into the survival horror game genre.  I did own Alone in the Dark for my Mac, which I now realize was a survival horror game ;-)

In any case, having played the demo of Resident Evil 5 on my xbox, and having listened to the Retronauts podcast during their movie month where they were comparing the Resident Evil movie (which I liked) with the game (apparently very few things were the same), I decided to get the Original Resident Evil (director's cut) as a PS1 classic download on my PSP. What-the-heck, I thought to myself, might as well try it out.

Having not played any games of that era on an actual playstation, the change of graphics quality required a little getting used to, but in the end it wasn't that bad.  The controls were something that had a learning curve as well (having played newer games on the PSP and the XBox and having a certain set of expectations did not help).  Once I realized that Resident Evil was more like Alone in the Dark in terms of game play, I fared much better - but the game is hard.  I was able to take care of some slow moving zombies, but I've come to a corridor where those red mutant dogs attack you...and it's not ending well :-)

I wonder if I'll get sick of this game and give up, or if I will slog through the end. Time will tell.
Ο Φοβερός
Comments

Out with the old, in with the new!

A while back (well, last September when I got my iPad),  I tried out Instapaper's competitor, Read It Later.  I have to admit that what drew me to Read It Later was the entry price: free.  Instapaper did have a free version but they axed it.  For my use free was good enough.  There were a few features that I now use, that I didn't back then, that were on the Pro version, but I didn't care.  Then, a few weeks later Read It Later had a sale, and BAM - I decided to get the paid version (for $1.99 I think) - not bad for all of the additional functionality, at least considering that Instapaper was $6.99.

In any case, I enjoyed ReadItLater and now it's gone...or rather metamorphosed into Pocket! For what it's worth, I prefer the old bookmark-based icon compared to "pocket" - Then again, change isn't always easy ;-)

I think that the new interface looks much crisper both on the web version and on the iPad version (haven't messed with the iPhone version yet). The nice thing about this version is that (it appears) to be doing video for offline use as well.  A while back I was testing out another app, called Spool, that was supposed to do video well. While Spool worked well, I almost never used it because I liked ReadItLater enough to not want to have two apps for "reading later."

Pocket (aka Readitlater 2.0) is now free.  I wonder if we, the paid customers, will get a Pro version in the future.

Another interesting Australian series has come our way, this time it's not a cop show, but (I guess?) the Australian version of The Sopranos

- I say "I guess" because I've never watched the sopranos.

The basic plot revolves around the drama around this family - the adopted kids, the oldest son as the stereotypical person to take over the family business, the middle son who's not respected, the youngest who is the screw up, and the daughter who's got the most brains, but is not given the respect she deserves (not that she seems to want to be in the family business anyway).

In watching a season of this I was surprised that the family business is only peripherally referred to.  It seems to be a combination of shipping exotic animals and drug running, but these guys (almost) never seem to get their hards dirty with the business.  Their front businesses seem to be doing well, so my main question was why stick with the illegal stuff, which on top of being illegal makes then risk life and limb.

All things considered, this wasn't a bad show.  I am looking forward to a second series (soon!)...and while you're at it, bring back the Hollowmen ;-)
Ο Φοβερός
Comments

This past weekend, after what seemed to be a long long time (but actually wasn't all that long), I finally beat Marvel: Ultimate Alliance

.  You know, it wasn't a bad game.  I got it used for $7, and I didn't know what to make of it.  I always try to avoid dungeon crawlers, despite the fact that I end up liking them in the end.  The same was true this time around - I bought the game because of the Marvel Caché, and ended up liking the game play.
The story was a bit weird, putting together X-Men, Spider Man, the Fantastic Four and a few other separate comic book universes into one.  As a fan of the X-Men, I enjoyed the game, opting to level up wolverine as much as I could.  I did end up with Iron Man and Thor in my party for all of the game, while changing out Captain America for Ghost Rider, Blade, Storm and The Thing throughout the game. So many character to choose, which (I guess) makes the game replayable (a lot!)
As far as achievements go, I only got  26 out of 58 total.  I suppose if I go back and unlock a few more characters, and do some more clobbering of on-screen enemies I can unlock some more.  Well, as nice as this game was, perhaps I will take a break before I come back to this.  I am actually seriously considering playing Marvel Ultimate Alliance 2.  It would be nice if I could keep my characters and XP from this one if I did :-)
Ο Φοβερός
Comments

I don't think I've ever laughed so hard during a technology show :-)

The numbers behind copyright Math

Sunday, Apr 1 2012, 21:47 copyright, Education, TED, Video Permalink
This was a pretty interesting TED talk that I listened to while on the way to work last week