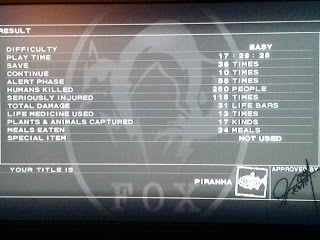 Last December (or was it last summer?) I bought the Metal Gear Solid HD Collection which came with MGS 2, MGS 3, MGS: Peacewalker, and the original 3 (top-down) Metal Gears.  Oddly enough, there was no Metal Gear Solid (PS1 title) included in this.

I decided to play the games chronologically, starting with the game that was furthest in the past, and that was Metal Gear Solid 3: Snake Eater.

The game was quite interesting to play, but the controls were pretty hard.  Using any sort of weapons (guns) was almost out of the question, unless absolutely necessary to kill a boss. For most of the game I ended up sneaking around and knifing people in the back.  I suppose that this is why this game is a stealth game and not a shooter. The story of the game was quite interesting, and there were quite a few "WTF?!?!" moments.  I remember playing MGS 2 with a friend over ten years ago, when it came out, and I don't remember the over-the-topness of some of the characters.  Ocelot for example (and Pain for that matter) were just completely over the top, and very un-soviet.

At the end of the game, I guess I earned the title of Piranha, which I guess it means I had over 300 kills, but this seems quite a lot. At this leg of the HD trilogy I have 13/50 achievements.  Next up in the chronology is Metal Gear Portable Ops on the PSP, which I did buy a few years back and never finished (got stuck somewhere, then school started, and I lost my mojo). All things considered, not a bad game.
Ο Φοβερός
Comments