Wednesday, Aug 20 2014, 14:38 Education, edutainment, Entertainment, Games, Humor, parody, video games, VideoGames, youtube Permalink
Last week I came across a parody for something called World of Peacecraft, where instead of blowing your enemies to smithereens, you make peace with them through bilateral and multilateral agreements.  As I already said, this is a parody, this game does not exist, but it does reminds me a lot of bad edutainment games. The funny thing is that I could see some misguided  company trying to make a simulation like this in real life.  Remember, just because people like platformer games, doesn't mean that they like solving math in a platforme ;-) Sometimes a game is just escape from the day to day reality :)

Monday, Aug 18 2014, 14:33 Entertainment, Humor, parody, Television, youtube Permalink
I never grew up with Reading Rainbow (I take it that it was popular in the US). My first introduction to LeVar Burton was as Engineer Geordi LaForge in Star Trek: The Next Generation.  Despite my complete and utter ignorance of the Reading Rainbow I did find the Tweeting Rainbow parody quite funny :) 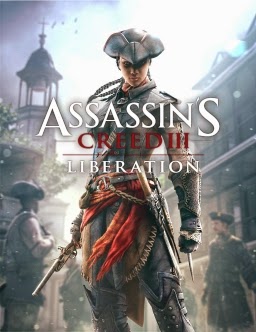 Right before I went on vacation I downloaded Assassin's Creed Liberation HD for the xbox 360 ( I think it was on sale). I started messing around with it at the time, but I really didn't get very far.  Upon returning I started playing through this portable game upscaled to home console.

The story follows Aveline de Grandpre, an assassin in the making.  Aveline is an orphan, living with her father and step-mother who are well-off French merchants in Louisiana. The story unfolds in New Orleans and in the Bayou for the most part, while there is a small diversion (and meetup with Connor, from Assassin's Creed III) in New York, and in Chitzen Itza.  Along with the usual missions that push through the Assassin vs. Templar plot, you have a variety of side missions including freeing slaves, taking out business rivals, and playing a mini game which puts you in the shoes of a merchant selling her wares and working the arbitrage opportunities in the Gulf of Mexico.

I have to admit that I wasn't getting into this game right away.  One of the big detractors was that there was no exiting the Animus and going into the real world to explore what's happening today. It seems like Aveline's "memories" were tampered with in this world so that only the Templar point of view comes across, thus providing a "fake" ending to the game and a "real" ending which is decidedly pro-Assassin.  One of the things that this game brings across is that it starts planting doubts as to whether the Assassin order is better than the Templars.

By the end, this game grew on me, and I would love to see more games with Aveline as the heroine.  One of the innovations of this game is that Aveline has three personae: the Assassin persona (which we have come to expect in these games), the Slave persona, because her mother was a freed slave and she can blend into situations that require it, and the Lady persona, on account of her father being a Frenchman in high society, so she can blend in like James Bond in high society mixers.  Each persona has strengths and weaknesses, and you can switch personae by going to dressing chambers all throughout the city. This way if you notoriety is high with one persona you can change, go deal with whatever you need to deal with in order to lower the notoriety, and you can switch back.  Also, each persona has different side-quests that they go on, like the Lady persona charming certain gentlemen into giving them her jewelry.

While I did do a fair amount of collecting, beyond getting an achievement for it, there is no benefit in the game.  I collected all diary pages (Aveline's mother's diary) and all I got was a silly hat.  How about a cinematic with a back story? This is one of my issues with Assassin's Creed games: those who collect don't really get the benefit in subsequent games.  In Mass Effect if you had completed previous games you'd level up earlier in the new game, you'd get extra gear (if I remember correctly) and other customizations. I wish the AC games did this as well.

As far as Achievements go, I got 14 our of 30 (47%). I finished the game the week before last and I spent a week going through the Bayou and New Orleans collecting stuff.  With little payback for this, I don't think I will be going to get any more achievements.
Ο Φοβερός
Comments