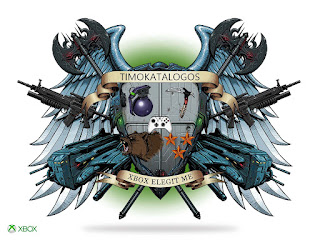 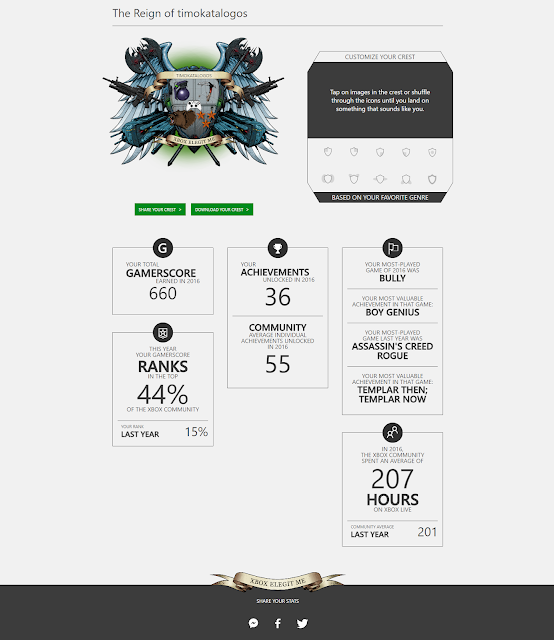 It's a little inaccurate (some old photos of me where tagged by someone, and I don't often post photos of myself on facebook, so that isn't as accurate as people who post a lot of Fb) - but it's fun to look at anyway. Και του χρόνου!

Kirk had a kid?! Wonder if we are going to see this in the NuTrek ;-) 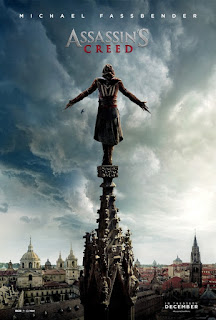 Last week I headed off to the movie theaters to see the new Assassin's Creed movie, which I have been waiting for with great excitement for a while (now, if only the Splinter Cell movie were to come out soon!). We also went during the day when there were only about 10 of us in the movie theater (seems like a waste, but I did like having more room to spread out, and if I laughed out-loud it wouldn't annoy as many people).

The movie was a bit of mixed bag.  There were good things, and some not so great things.  The movie plot summary (from wikipedia) is at the end of this post.  So,  let's start with the good things (and not be negative). (oh yeah...spoilers)

The Good:
I really liked how this film captures the visuals of the game. While other games haven't taken place in Spain (well, Assassin's Creed: Discovery on the DS takes place a year before this events of this movie), the general feel of the console games has been captured, from the camera pans and zooms, to the flying eagle (which may have been a little overused IMHO), to the cold and sterile environments of the Abstergo labs (which actually reminded me a bit of the forerunner locations in the various games). The action sequences in the movie felt (to me anyway) very much like the action  in the console games that established this series.  The story was great and it helped bring back an important element that went missing after they killed off Desmond in the games - the perspective of what's happening in the present day and what's happening with these two warring factions today.

The Bad:
The dialog was bad at times.  I think the movie plot was great, but the dialog didn't support it (and at times it worked counter to it!)  For someone who's played the games (all except Unity and Syndicate up to this point), this whole "eradicating the Creed" is complete an utter nonsense.  One eliminates/eradicates the assassin brotherhood and NOT the Creed.  The Creed is what you say when you're initiated into the order of the assassins and it's what you live by.  Another WTF moment is when the brotherhood cuts off Aguilar's ring finger when he's initiated into the order (wtf?!  I'm sure you'll need that to do the crazy parcour stuff you'll do later in the movie...) - not something that's in the games.  Kristin was with me for this movie and she was excited to see 1400s Spain...but apparently this was disappointing too, because the film architecture looks more  Italian Renaissance which wouldn't have made it into Spain by that time.


All things considered, I'd give the movie a 7.5/10.  I was expecting an 8.5 movie (once you've played the games and are engrossed in the lore, one movie will most likely not seem to do it justice).  I do hope there is a sequel which ties in to the Chronicles games, as well as the Freedom Cry and Liberation games.


Did you see the movie? What did you think?

Convicted criminal Callum Lynch is rescued from his own execution by Abstergo Industries, the modern-day incarnation of the Templar Order, and learns that they are searching for the Apple of Eden, which seeded the first sin, in order to subjugate the human race and end its perceived corruption. The company's head scientist, Dr. Sophia Rikkin, reveals that Callum is a descendant of Aguilar de Nerha, a member of a secret order of assassins that for centuries have opposed the Templar Order, and conscripts him to the Animus Project, in which Callum is connected to a machine that allows him to revive Aguilar's memories so Abstergo can learn the current whereabouts of the Apple of Eden.

In Spain, 1492, Aguilar and his partner Maria are deployed to rescue Prince Ahmed de Granada, who has been kidnapped by the leader of the Templars, Tomas de Torquemada, to coherce Prince Ahmed's father, Sultan Muhammad XII, to surrender the Apple of Eden. Aguilar and Maria intercept the chariot transporting Ahmed, but are then ambushed and captured by Torquemada's enforcer, Ojeda, just as Callum is pulled out of the Animus by Sophia.

In captivity, Callum befriends other descendants of assassins, led by Moussa, and begins experiencing hallucinations of both Aguilar and his own father, Joseph Lynch, who murdered Callum's mother while in assassin attire. Callum and Sophia build a rapport over their sessions, in which Sophia reveals herself as the daughter of Abstergo's CEO Alan Rikkin, and confides with Callum that her mother was likewise murdered by an assassin.

Back in the Animus, Aguilar and Maria are scheduled for execution, but manage to escape, leading to a rooftop chase in which Aguilar performs a Leap of Faith, causing the Animus to malfunction. Callum is then extracted and placed back in captivity, where he learns from Joseph that his and Aguilar's memories are merging, allowing Callum to tap into Aguilar's combat abilities, and that Callum's mother was an assassin and chose to die by Joseph's hand rather than be subjected to the Animus by the Templars. Meanwhile, Alan is pressured by his superior Ellen Kaye to shut down the Animus Project due to its lack of results, leading Sophia to realize Alan cares more about the eradication of the assassins than using the Apple of Eden to rid the world of violence.

Callum is placed in the Animus once again, whereupon Aguilar and Maria ambush a meeting between Muhammad and Ojeda to exchange Ahmed for the Apple of Eden, killing the Templars and retrieving the Apple of Eden. Ojeda captures Maria to force Aguilar to surrender it, but Maria chooses death and Ojeda fatally stabs her before Aguilar kills him. He then hides the Apple of Eden in the tomb of Christopher Columbus, where it is found by Abstergo. Rikkin and his followers then converge on a Templar sanctuary in London to perform a ritual to harness its powers.

Having assimilated all of Aguilar's memories and abilities, Callum manages to escape and rallies Moussa and the other descendants to stop the Templars. They attack the sanctuary and Callum comes across Sophia, who has grown disillusioned with the Templars and reluctantly allows them to act. Callum confronts Rikkin and is forced to kill him to retrieve the Apple of Eden, whereupon the assassins depart, vowing to once again protect it. Horrified by her father's death, Sophia vows revenge upon Callum.
Ο Φοβερός
Comments

I am generally very conservative when I set my reading goals each year because I tend to think of books as thick things that take a long time to get through.  However, as this year has proven again I've read more books than I expected.  If you notice, you'll see that it's a lot of comic books and star trek novels (audiobook or text-to-speech ebooks for the latter). Not as many academic books as I expected.  There are a few in my 'in-progress' now that I really should finish by February...

Did your reading go as you expected?

Monday, Dec 26 2016, 02:00 Academia, academics, journals, peerReview, scholar, Social Media, web 2.0 Permalink
The other day Publons, a service in which people can get credit for performing peer reviews for academic journal articles, sent me a link to my year-end-review.  Just like other year-end-reviews, I don't really treat it as a report card, but rather  as a "huh!, ain't that interesting!".  I think the old saying of you get out of something what you put into it is quite true with these end-of-year dashboards.  For example it's telling me that my average review of an academic article is 0 words, but that's only because I don't post my reviews in the Publons system, rather I send them to the authors and the editors within the journal management system. If there were an integration there, it'd be easier to get my averages ;-)  Still, it's interesting to see some data about my an aspect of my scholarly activity this past year, 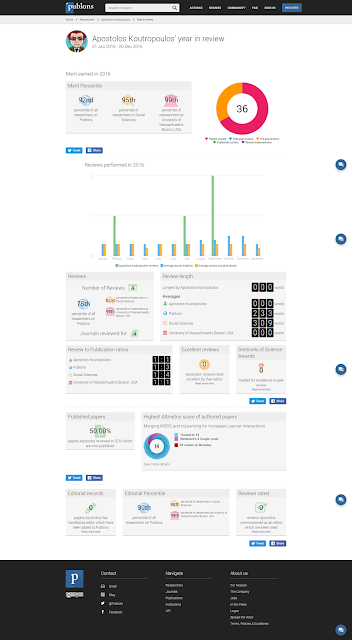 Sunday, Dec 25 2016, 12:01 Christmas, Entertainment, holidays, KPOP, music video, 한국어 Permalink
Saw this on facebook earlier today. Some interesting K-Pop that is holiday themed (at least from the visuals) ;-)  I guess  I need to go back and discover new K-Pop.  This song is by Crayon Pop 크레용팝 꾸리스마스 and it's called Lonely Christmas 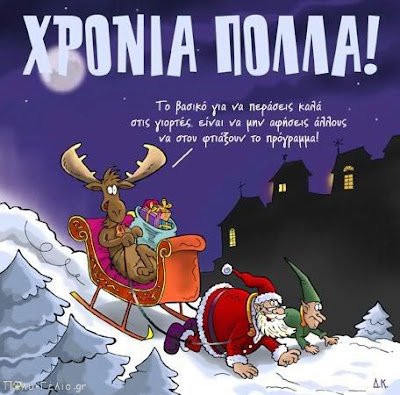