Review: The Fifty-Year Mission: The Next 25 Years: From The Next Generation to J. J. Abrams: The Complete, Uncensored, and Unauthorized Oral History of Star Trek

The Fifty-Year Mission: The Next 25 Years: From The Next Generation to J. J. Abrams: The Complete, Uncensored, and Unauthorized Oral History of Star Trek by Mark A. Altman
My rating: 4 of 5 stars

Interesting read for the history of TNG through the Kelvin-timeline movies. There was also a little bi in here about pop-culture influences of Star Trek, and a nod to fan films. For the first book (this being the second) there seemed to be a lot of background info for TOS and the first movies, but the story in this book is one continuous flow of the 18-year run through TNG, DS9, VOY, and ENT. You do get specifics in each series, but it does not feel as in-depth as what TOS got in the first book. Still an interesting read!

Turnaround by Peter David
My rating: 3 of 5 stars

I guess this was New Frontier's version of a Mirror Universe cross-over. I've read some New Frontiers books in the past but I am not as familiar with the characters that were on the TV shows. Despite this, the story wasn't that bad if you can deal with the feeling that you are coming to a story part-way through a series. I guess I need to add New Frontiers on my list of series to read; and perhaps read from the start since I read the first four novellas 4 years ago when I was going up to Edmonton to start my EdD.

A bit of a silly punchline. My preferred punchline is an alternate "Don't worry, I've been bothering Schidzo and Gainweight too!" that refers to Q's annoying of Janeway and Sisko :-)
(original archive here)

Tuesday, Mar 27 2018, 17:30 adieu, bookmark, Social Media, Social Networking, Technology, web 2.0 Permalink
I guess this shows you how much attention I paid to Del.icio.us! I learned the other day that Delicious went under last summer, purchased - for one last time, by Pinboard (another web 2.0 company) to maintain the site for historical reasons (good on them!).  Delicious was quite an innovative site at the time.  Launched in 2003 to make web bookmarks social and to enable people to share interesting links with one another. I ended up moving all my safari and firefox/netscape bookmarks to it early on, especially when I wanted to keep track of things both at home and in the office, and I connected with some classmates and online friends in the EdTech community on this site.

After the initial sale to yahoo (2005) and most certainly after the sale to AVOS (2011) the site certainly lost it luster for me. Many in the EdTech community migrated to Diigo, which I think they viewed as more stable.  After Google Reader folded I attempted to re-purpose delicious to be the place I shared stuff I read on GReader, but the lack of users made it pointless. At the end, with IFTTT, I used both Diigo and Delicious as concurrent bookmarking services to share stuff I read on Feedly and Reddit (sometimes via Twitter).  I guess now it's just Diigo.  Adieu delicious!

Tuesday, Mar 27 2018, 10:24 Entertainment, Humor, karate kid, nostalgia, youtube Permalink
Now THIS is interesting. It's both and underdog story, and a redemption story, and potentially a role reversal story, all steeped in heavy vats of nostalgia. When the "youtube red original" logo came on screen I immediately wrote this off, BUT I was hooked and needed to see the rest of the trailer (you know, the car accident rule, you know it's gruesome, but you can't look away).  I am glad I didn't because this series (or movie?) looks really great!

Monday, Mar 26 2018, 19:06 Assassins Creed, comics, Entertainment, frustration, Humor, video games, VideoGames Permalink
I came across this comic on Reddit the other day.  I both laughed, and wanted to throw a controller at the screen :p  While I did want to complete all the option pursuits and co-ops and such, this is one issue that made me want to break the screen :-) Imagine trying to jump (or heck go down and not jump to a 'random' location) and being on a timer. eff this :p 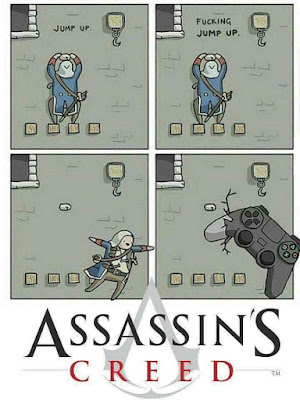 A deleted scene from Star Trek Discovery's season finale his the netwaves the other day where Mirror Gheorghiou is recruited into section 31 (which also answers all the questions on the web about that little black starfleet badge).  Effin' awesome is what I have to say!  I hope that the fact that this was deleted does not mean that this plotline is killed off... This would be a totally awesome story thread, with Mirror Gheorghiou maybe even making it to the top of the bureau!

May seems a little late, but it will be here soon enough!  So will Colony season 3!  The trailer for it came out a few days ago and I am all excited about it! My only worry is that we're treading into "Falling Skies" territory here. Falling skies started strong and it really fizzled out.  It's as if the creators didn't know what to do with the series.  A protracted war would be tiring (for the on-screen fighters, and the audience), and the ending was just m'eh (aliens saw as a threat and wanted revenge over a failed invasion attempt?).  I hope Colony doesn't fizzle out, or fall into that trap. The human-on-human subjugation on the behalf of aliens, and how the aliens got us to do their dirty work is a good exploration of human beings. Only time will tell.

Victory is Life! The next Star Trek Online expansion

"Victory is Life" is a saying of the Jem'Hadar, one of the subjugated races of the Dominion (...or is it "in the Dominion"?) who are, basically, the warriors of that alliance.  It is also the name of the next expansion for Star Trek Online which is hitting PCs his coming summer (I sure hope it's not concurrent with the Summer Event on Risa!). I do find it a little odd that the developers chose this saying considering that the race of aliens that said it were subjugated and made dependent on drugs (not to mention bred for war, which is another form of subjugation).  I guess we'll have to see how it all fits into the grand star trek narrative.

Here is the teaser trailer (which has me excited)

An interesting book to read if you're interested in CSCL. It may be a tad bit dated at this point, but some core (or historical) materials are of value. For me specifically - and my EdD research, there were some interesting points to be made about CSCL. I don't know if I want to go back and graft them onto the literature review, especially since my proposal is already submitted and the literature review is over 16,000 words, but it may be valuable for the discussion section...when I get to it.