Monday, Jan 21 2019, 09:14 Entertainment, MMORPG, online, Sci-Fi, StarTrek, video games, VideoGames Permalink
email update from STO - for those like me who got Lt. Tardigrade as their nouveau tomagochi ;-) 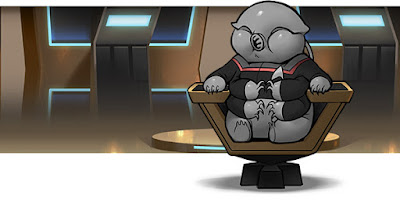 Thanks to some generous donations from the local shipyard, the Lieutenant now had his very own starship bridge, of sorts, in his enclosure. We managed to secure three decommissioned consoles, and his very own Captain's chair. It's a little beat up, to be sure, but he doesn't seem to mind, and he's been running between consoles and posing dramatically all day. On his walk today, we stopped by the shipyard today, and some of the engineers there were absolutely taken with him. More next week.
Ο Φοβερός
Comments 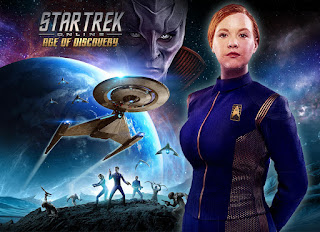 Last fall, in what seems like the heels of  the "Victory is Life" expansion some new content dropped on STO, titled "Age of Discovery" which seems to be content for the game that runs concurrent with the show that started yesterday evening, and perhaps with the on-going IDW series on Star Trek Discovery.  With this new content you start off as a cadet in the Discovery era of Star Trek (10 years before TOS).  This particular mini-expansion doesn't have the usual hallmarks of expansions, such as temporal beacons, completing missions for account-wide rewards and so on.  It also seems like the content for this expansion will be released periodically over 2019 in conjunction with the show; and perhaps when the show concludes in the spring we'll come back to the Victory is Life story-arc.

With this expansion, one thing that went away was the availability of "Red Alerts" which were relatively easy queues for multiple players to join on a common goal.  These queues had a 30 minute cooldown, which means that once you concluded a game you needed to wait 30 minutes before you started another one.  And, there as an accolade associated with it: Kill an insane amount of borg, earn medal (Defender of the Quadrant).  The problem was that each Red Alert only got you 4-8 borg...so getting to 2000 took forever.  Now, before they retired the Red Alerts they got rid of of the cool down period, so I was able to grind through the remaining 200 kills to earn the accolade

Defender of the Quadrant

Another thing that changed was that Random queues where introduced, and counters (for how many people were queued up for something specific disappeared).  Many seem to have hated this, but in all honesty I can finally find people to play the Khitomer Accords with.  After 7 years playing I finally was able to get the Quadra Service Medal (play a Khitomer Accords mission 100 times).  Yes, lots of grinding, but it goes MUCH faster when people actually queue up for these things.

Finally, something  fun before the end of 2018 - After you completed a silly little quiz on the STO website (sort of like those web-based personality quizzes from the late 90s) you got matched up with a specific Tardigrade.  I got Lieutenant Tardigrate (as opposed to Party Tardigrade or Scientist Tardigrate).  Cryptic said they would send periodic updates about these via email. I wonder how long they'll keep it up. 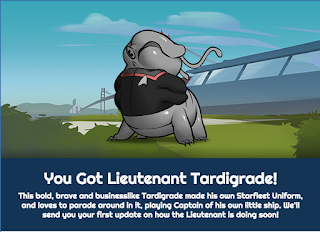 The first email: Folks, I don't know that I've ever seen a Tardigrade as happy as the Lieutenant when he saw his new uniform for the first time. I've heard these magnificent creatures vocalize several times, but never quite so high pitched of a....well, squeak is the best way to describe it. It was nearly impossible to hold him still to get the uniform on, but once it was on the Lieutenant was the absolute picture of calm, standing at perfect attention and scanning the room. We think we may need to get his enclosure some more decorations.

That's it for STO for now...
Ο Φοβερός
Comments

Saturday, Jan 12 2019, 09:28 Books, goodreads, review, Social Media, Social Networks, YearInReview Permalink
I had forgotten to have a look at the nice infographic that Goodreads prepares for its users at the end of each year. I read more than I intended to, even though quite a few are comics ;-)

Persepolis Rising by James S.A. Corey
My rating: 5 of 5 stars

Woah! Will this universe ever know peace?

Jump forward 20 years, Duarte is back, he is now emperor or some sh*t like that (I know, high council Duarte, just go with me). He is part protomolecule. He sends his protomolecule technology fleet to colonize the remaining human colonies. Just as Holden "retires" and sells the ship to Bobby all this happens. Can't the universe catch a break? The only bummer is that the next book is months away. I'll need to find something else to read on my commutes at the moment :-)

Well, here is another year-in-review, this time from Swarm (aka Foursquare).  Not surprisingly most places visited and mayorships have to do with every day life ;-)

I guess in 2019 I should contribute some photos to the places that I am a "trendsetter" ;-)

Friday, Jan 4 2019, 03:30 adieu, authentication, blogging, micro-blogging, Photos, security, Technology, tumblr, verizon, Yahoo Permalink
Another one bites the dust - at least for me.
In 2018, after 10 years of using Tumblr I decided to stop using this service (it's questionable how long it will be around anyway).  Initially, early in September I lost access to my account.  I had enabled 2FA (2 factor authentication) but none of the the security tokens on my 2FA application would work.  Argh...   After contacting support to try to get my account cleared so I can log-in again, the support folks asked me to take a photo of myself holding the day's paper (well, not really, but they did ask me to write down the date when I photographed myself), and point them to a photo of me on my blog so they can compare.  I don't often post  pictures of myself on Tumblr, but as luck would have it, there was a photo of me in the office.  I took a photo of me in the office, wearing almost the same thing, and holding a sign saying "Hey Tumblr! It's me!" along with the day's date.  Apparently they couldn't verify me (a photo of me, in the same place, wearing almost the same thing, from a verified email and you couldn't verify me? come on!). They did suggest that I open another account! (WTF?)
I did try appealing this with support, but those **&*&** have ghosted me.  So, goodbye Tumblr.  It's too bad because the platform was pretty nice. I loved the interface, I liked that you could just post a link, a quote, a random video, and not have to create a full blog post with text and such. It was perfect for a photoblog.  I guess from now on Instagram will have to do.
Ο Φοβερός
Comments

Thursday, Jan 3 2019, 05:00 Assassins Creed, Defiance, Entertainment, Technology, video games, VideoGames, XBOX, YearInReview Permalink
The year-in-review notifications that various social media sites provide can be quite fun.  This year's year-in-review for xbox is a custom made snowball (too bad you can't order one!) based on the various statistics from your gaming preferences.

It seems like 2018 for me was the year of Assassin's Creed, with over 200 hours logged into  Origins Syndicate, and Unity.  While this might not seem like a ton of time, for me it seems like a crazy amount of time to put into a game.  I wonder what 2019 will bring with Odyssey and the various expansions for it.

The thing that really surprised me was Defiance.  I didn't think I had spent that much time in the reboot of Defiance, but apparently I did.  Even with 70 hours played I still have not beat Nim Shondu... argh!  What a pain... 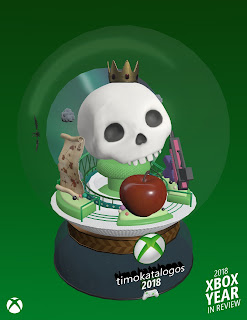 Wednesday, Jan 2 2019, 09:00 Academia, academics, adieu, archives, Social Media, Social Networking, Technology Permalink
Well, with 2019 here, and 2018 gone I've bid adieu to Academia.edu. There isn't one thing that really made me quit, but a variety of factors that really combined to make the network feel "sleazy".  When Academia.edu kicked off it felt like a good idea: a social network for academics to see what each other is working on, to share pre-publication versions of their work, heck even ask for feedback on their current work. For those thinking about applying to a school it was also a good was to peek and see what their potential future professors are working on, and to read their work (especially if they don't have access to expensive library databases).

That was the dream.  What it basically turned into was a constant nag with emails.  Yes, I could turn off their email notifications, but it really annoyed me that I'd get emails saying that my name was mentioned in a paper (probably a citation) and I needed to pay to see what it was.  Google Scholar provides that for free.  The emails also felt like trying to bait you into a service that you do not need, like Classmates.com did (and got sued for!). The thing that annoys me the most though is that whenever I submitted metadata for any of my publications to Academia I could never just provide a URL to the article. Many of the things I've published are open access, which means that people can easily find it.  However, academia required you to upload a copy, which I think was a bad idea on their part.  To be fair, ResearchGate does this too (at least their platform seems a bit better) and it annoys the hell out of me when people request articles that are in OA publications. If they are OA, I don't bother uploading.

Anyway.  With my Academia.edu account killed off, I am wondering if in 2019 I should do the same on ResearchGate... 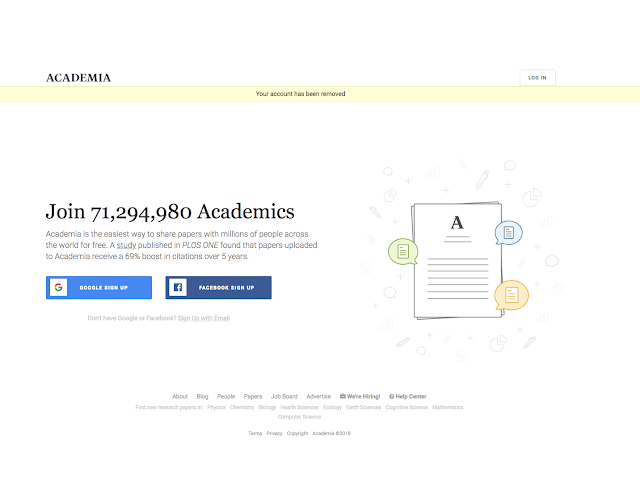 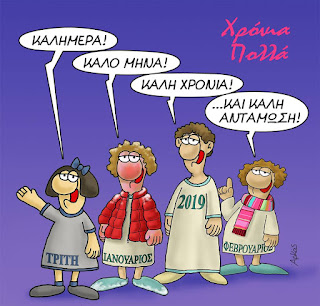