More of a comment on both parts of this story: Interesting commentary on religion (in a way that only a comedy can do it). I did find the story a bit unbelievable - anthropologists converting from (essentially) atheists to the religion of the Krill just by studying their sacred writing, but it was an interesting Orville tale nevertheless. At the end of the story, it sets up a potential for a continuing series in comic form.

More of a comment on both 1+2 of this series.  Interesting story. Gives a bit of background on the "federation" equivalent in the Orville universe.  It's interesting that the old-style uniforms had rank insignia like TNG ;-). We also get to see sentient fowl, which was very Mighty Max :-). Some of the Orville crew get stranded on a planet where they discover the remains of a ship that was lost a long time ago. One of the ship's junior officers rigs the replicators to produce food for the locals after the econological disaster (that the ship inadvertently caused) kills most things off and makes life on the planet unsustainable.  What will the crew of the Orville do?

It's interesting how much play the gamma quadrant gets in the comics, yet in the series I don't recall them ever making such a big deal of it (most issues on DS9 seems alpha and beta quadrant related).  This mini-series is all about the Klingons and the Cardassians butting heads because the Romulans make it look like a Klingon ship has been destroyed by a Cardassian ship in the gamma quadrant.  Interesting story, with a nice little quark sub-plot.

Thursday, Jul 23 2020, 07:27 Action, Entertainment, farcry, ubisoft, video games, VideoGames, XBOX Permalink
Another Ubisoft trailer, this time for Far Cry 6. I finished Far Cry 2 a while back, and went back to the original before I retired my Xbox 360.  I guess  I need to catch up with the games (probably after my dissertation is done).  Giancarlo Esposito makes for a good bad guy (at least in this trailer).

Tuesday, Jul 21 2020, 07:24 Entertainment, trailer, ubisoft, video games, VideoGames, watchdogs, XBOX Permalink
Seems like it's video game announcement time, and even though I have quite a few unplayed games left, I am always looking toward what's coming up next!  Heck, I haven't even started Watchdogs 2 yet!    Anyway - Watchdogs Legion is coming out sometime this year and the cinematic trailer looks pretty good!  There's something very  "V for Vendetta" about this game.
Ο Φοβερός
Comments

The trailer for the new animated star trek series is officially out (with the series premiering in a few short weeks). I wasn't really sure about this series when I first heard about it, mostly because it was associated with Rick and Morty (another animated series which I don't particularly like - the dialog is not for me). After this first official, full length, trailer, I am cautiously optimistic about this series.

Star Trek: Voyager: Mirrors and Smoke by Paul Allor
My rating: 5 of 5 stars

I always enjoy a good mirror universe story.  Voyager (like TNG) didn't have an on-screen mirror universe, but it's interesting to see that even in the mirror universe Janeway and crew were stranded in the Delta quadrant.  Faced with the prospect of returning to the alpha quadrant to fight a losing battle with the KCA, they decided to stay in the delta quadrant and become space pirates.

It was a rather interesting epilogue to the most recent season of discovery.

Synopsis from Memory Alpha: Many Klingons, including Kor's father, decry L'Rell’s position and actions as chancellor as well as her self-appointed nickname of "Mother." Pike contacts L'Rell in an effort to build a lasting peace atop their temporary alliance. She agrees to preliminary talks on the planet Vaset III and appoints Kor as head of her personal security. Still on leave, Spock copes with Michael's absence and considers his path forward without her. Pike asks for his help with the peace mission, though Spock questions his own presence at such an historic event. L'Rell asks Spock for a private conversation, seeking logical input on dealing with her internal enemies. However, some of those enemies, calling themselves the Shadows of Kahless, strike quickly, seizing control of her flagship and bombing the conference. They intend to return L'Rell to QonoS for a public execution. Spock evades capture long enough to rescue L'Rell, who remotely takes back control of her ship and crashes it into the planet's surface, eliminating at least some of her enemies. She abandons the peace conference, instead returning home to root out the rest of her enemies. Spock realizes that his place is indeed aboard the Enterprise and returns to duty.

Tuesday, Jul 14 2020, 04:00 Android, Assassins Creed, Entertainment, RPG, strategy, video games, VideoGames Permalink
One of the games that I've been playing periodically while watching TV, is Assassin's Creed Rebellion. The game is a mobile strategy RPG with all the regular fixings of a free-to-play game: a limited in-game currency that you use to play missions. The currency replenishes at fixed time intervals, or you can pay to get more of it ahead of the full replenishment time.

The game draws from the story of the Assassin’s Creed film which came out a few years ago. The game starts with Spanish assassins Aguilar and Maria in their quest to purge Spain of the Inquisition — which is run by the Templars, natch. To do so, you have set up a base in an abandoned building, build it up, recruit assassins, trick them out with gear that you craft (from raw goods that you collect from your missions), and proceed to work your way across Spain, running missions, gathering loot, and picking up stray Assassins to bolster their cause. 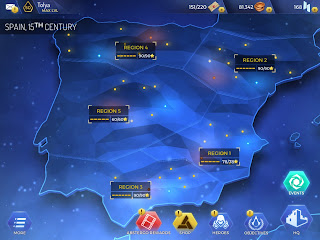 The game is fine, but I am getting rather bored with it.  All of Spain is cleared (as you can see above), but the rest of the world is still a mystery.  There is so much potential here to move into France, Italy, the Caribbean (perhaps to revisit Assassin's Creed Pirates), but the game is at a standstill.  You do have periodic special events where you get time-limited missions to collect other assassin DNA to add to your team, but other than having the bragging rights for having collected (and maxed out) that character, you don't really have much in the way of a new story.   It is a rather fun game, but it's starting to become repetitive:  enter a 3-day event, repeat missions ad nauseum, collect loot from replaying old missions, equip your characters with new gear - however, it feels like you're all dressed up and have nowhere to go with these characters.

This is one of those stories that I could see being adapted to a DS9 episode. Bashir takes some well deserved R&R to Risa (the number of days he takes off seems ridiculously low, but whatever), but he gets abducted by the Maquis because they need a doctor. Of course, this isn't the real reason, one Maquis is trying to get her relative back from the Cardassians, and the Cardassian wants "plain simple Garak". Through some hostage arbitrage, via Bashir, this happens. This story takes place just after Voyager disappears into the badlands.
View all my reviews
Ο Φοβερός
Comments