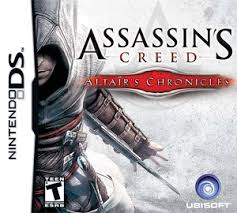 Well...it took a while...a long while, but this game is done ;-)  I had started to play this game part time on my 3DS because I wanted to get through the entirety of the assassin's creed series before I got an xbox one.  I had originally played this on my jailbroken iPhone 3GS many years ago (back in the iOS 4.x days) and I found the game extremely (extremely!) frustrating to control on a touch-screen.  The game was developed with buttons in mind, and the on-screen buttons, as seen in the screenshot underneath, just didn't work out for me. So, back then, I don't think I made it through the first few stages of the game.

Now, armed with a Nintendo 3DS I came back to the game.   The game is a platformer (more or less).  It's not 2D and it's not 2.5D...it's also not 3D... It seems like a cross between 2D and an isometric game to me, which makes it a little hard to control at times, especially when you are working on diagonal movements, like diagonal jumps.  Let's just say that Altaïr died many (many, many, many) times while I attempted to finish this game.

The game is actually a prequel to the first Assassin's Creed on XBOX 360 and PS3.  The game follows Altaïr before the events of those games, before there is a discovery of a mole in the Assassins' Order.  I am feeling a little lazy to rehash the story, so here is the recap from wikipedia:

1190 AD during the Third Crusade, Crusaders clash with Saracens for control of the Holy City, Jerusalem. A young assassin, Altaïr, returns home to Aleppo and finds it under attack by The Templar. He assists in repelling the attack After his 'death', Altaïr is tasked by Al-Mualim to retrieve the Chalice. It is said to have the power to unite all factions — Crusaders or Saracens — and end the Third Crusade in victory for the side that possess's it. However, the Chalice is too powerful and must be found and destroyed.

The assassin, Altaïr, begins his journey at Damascus, where a Rafik tells him that the merchant, Tamir, has connections to the Templars. Upon interrogating Misbah, a man with connections to Tamir, Altaïr confronts him and, before killing Tamir, learns that the Chalice is kept in the Temple of the Sand and that Altaïr needs three keys to enter it. Altaïr then visits the circus dancer, Fajera, but she is unwilling to help, leaving Altaïr to fight a circus brute, Badr. After catching her, she gives Altaïr the first of three keys, and tells him that a man that is at the Templar hospital in Tyre could help him find two more keys. Fajera also tasks Altaïr with killing a Templar named Alaat.

Arriving in Tyre, the first thing for Altaïr is to speak with Hamid, the Tyre assassin, from whom he learns that Roland Napule, head of the hospital, has been questioning someone recently. In order to get into the hospital, he navigates through the sewer, enters the building and assassinates Roland. Altair is given the second key by a prisoner of Roland, an old man who has been to the mysterious temple of the Chalice.

Altaïr then travels to Jerusalem and speaks with local assassin agent, Kadar, learning that the Templar leader, Basilisk, is usually at the Jerusalem royal palace with the king, and that he has the third key. The king is going to have a party somewhere soon, and in order to get closer to Basilisk, this location should be discovered. Altair overhears some of the noblemen's conversations and questioned Ayman, a man invited to the party. He finds out the location of Villa where the party is about to begin, infiltrates it with the help of one of Kadar's men, and encounters Lord Basilisk for the first time. After a battle with him Altair gets the key, but has no time to kill him and runs away. Later in Jerusalem, Templars attack an assassin agent, Hazad, and steal the map to the desert temple. Altaïr chases them to their tower, climbs to the top, facing heavy resistance including catapults, archers, and a mindless brute he fights in a courtyard. After making his way through the tower defenses and killing the archer captain in charge, Altair finds the way to the tower and its Master, an assassin-like figure who is actually a high-ranking Templar. Altair fights his way through the tower, killing the Master's guards and his student. Finally, he reaches the Master himself, kills him and takes the map. Altaïr then proceeds to the Temple of the Sand, where the Chalice is probably kept. There, he encounters Templar forces and fights his way to the antechamber, defeating the Axe Warrior. There, he finds an empty chest and Lord Basilisk, who hints that the Chalice is in fact a woman. Basilisk taunts him, and Altaïr runs back to Tyre before the temple collapses.

In Tyre, Hamid tells him that in order to infiltrate the local Templar stronghold, where Basilisk is located, he needs to free two captured men. After freeing two captive brothers, they pinpoint the entrance for him, and Altair infiltrates the hold, where he fights and badly wounds Basilisk. Altair agrees on a deal: Basilisk's life in exchange for information. Basilisk reveals that the Chalice is in Jerusalem, and that the Templars are sieging Acre and are going to poison the water to quicken the siege. Before leaving for Acre, Altair burns Basilisk's ships so he can't reach the Chalice first.

Altaïr journeys to besieged Acre and helps the city by fighting off attacking Templar soldiers, infiltrating the siege camp first in a disguise of a soldier, but continuing in a scholar's attire, and killing the Templar commander. Altair manages to escape the camp using a catapult.

He then goes to Jerusalem, where he successfully rescues the Chalice from a group of Templars. Altair identifies the Chalice as Adha, the woman he knew and liked before the events of the game. From her, he learns that the Templars have paid off Harash, the second-in-command of the Assassins.

Altaïr plans to attack Alep, the assassin fortress, kill Harash and run away with Adha, but after making his way through Harash's assassin guards and killing him, Adha is kidnapped by Basilisk and taken to their port in Tyre.

Altaïr fights through the Templar knights and kills Lord Basilisk in one final confrontation on his ship. But Adha is on a different ship, which escapes before Altaïr can catch it. He swims to shore and, seeing the Templar ship far off in the distance, yells "I will find you, Adha!".

With the story recap out of the way, here are some thoughts on the game:

Story: I actually liked the story. It seemed fairly well paced and I liked the idea that one of the pieces of Eden was a human (or the piece was a part of her?)  I don't really recall much happening to this storyline. Did Altair find Adha?  I think that in the Assassin's Creed II trilogy we see some aspects of this surface, but not much is made of it; and considering that I didn't know much about this storyline when I played the trilogy it didn't really stick with me.

Controls: The main controls of the game were really problematic for me.  Since I had physical controls on the 3DS (as compared to the iPhone) I had a much easier time controlling Altair.  Even with the physical controls some timed events weren't that great, leading to much frustration.  There are, however, some interesting mechanics used in this game which include pickpocketing by using the lower screen and the stylus to play a mini-game  to take things out of people's purses;  coercing, by again using the lower screen (touch screen) to play a mini-game where you need to precisely hit certain points at the right time in order to coerce someone to give you information; and finally clearing out dust and sand from objects by blowing on the microphone to blow away the dust and debris off things you need.  These events were not used a ton in the game, but they did break up the monotony of moving forward, fighting, and jumping. Yes, there were some environmental puzzles too, but ...m'eh...

All things considered the game was OK.  I liked the story, but he controls really detracted from enjoying the game a ton.  Considering that this came out close to 10 years ago, it's not bad (it's still playable and enjoyable on the DS).  The "hard mode" is now enabled, since I finished the game, but considering the urges I had to toss my DS on "regular mode", I think I'll pass.  Overall I'd give is a 7/10.