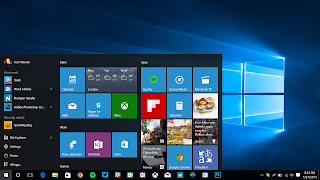 Sure, Windows 10 isn't "new" any more, and there are enough people out there that upgraded so that they could get that annoying popup to go away, but as an enterprise user I am happy to not have had to deal with that "do you want to upgrade now?" (they should have used Clippy to make those announcements) :-)

With work done at my home, and my work computers resting for now, it seemed like a good time to go through and upgrade at least one computer to see what's new.  Seeing as my campus is still on Windows 7 enterprise, and probably won't be making the move to 10 any time soon, I thought I'd be on the forefront of things (like the good old days) since I am (sort of) the tech guru of the department.

I decided to upgrade my Samsung Slate 7, which is a computer I got a while back, and it's been my daily driver for days that I work from home. It's also my main Star Trek Online machine (also when I work from home).  As a machine it's perfectly fine, but I realized that the 128GB space (99 usable I think) was a bit of an issue. 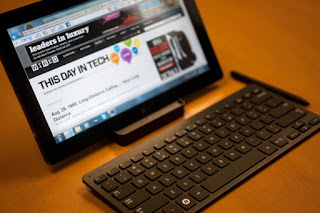 For whatever reason, even though I've uninstalled things like crazy, the machine was still running out of space.  I deleted OneNote Touch, which I never used - and that saved me 3.5GB (seriously?  That much space for an app that I didn't use?).  Furthermore I uninstalled SkyDrive and deleted the local files (which I never used) and that gave me another 7 GB.  Finally, I had to uninstall STO which came in at a whopping 23 GB.  After all this deleting, I was finally able to install Windows 10.

The installation itself was pretty painless, and getting back and running wasn't a big issue after the fact.  I did end up re-installing STO (which was only 12GB...so I guess that there were a lot of old patch files on there that I deleted).  The Windows Menu has returned, and it seems to look like Windows Phone, which I suppose makes sense - if you want people who are used to Windows Interface to pick up your mobile device - or vice versa.  I ended up going with a 'classic' Windows 8 look, having the Start Menu be full screen.  I am not a fan of the vertical scroll, however.  I did prefer the horizontal layout of the application in the previous version of Windows.

Finally, I setup Cortana as the voice assistant.  Despite the fact that I setup my voice to be recognized, Cortana doesn't seem to respond.  At some point soon I will update my Surface Pro 3 as well and see if that makes a difference.  Cortana did give me an error saying that the microphone placement on the Slate wasn't optimal, but I did go through the training sequence without a problem.  Small problems.

So, after a day of this, things seem to be back to normal, in terms of productivity. The only thing I find odd is that a pop-up came up asking me if I like windows 10, and this was less than 24 hours since I installed it (and only around 3 hours of use).  I would have to say that I don't have enough experience with it to say whether I like it or not, but I do prefer it to Windows 7.  Definitely much more touch friendly.

I do wonder if MacOS X will go down that touch-friendly route, and if the iPad Pro is a precursor to that.
Ο Φοβερός
See Older Posts...