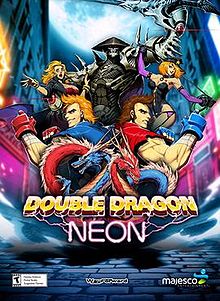 When Double Dragon Neon came out on gamepass, I thought I'd give it a try. When I was a kid, I rather enjoyed playing double dragon on my monochrome Gameboy, and it always seemed like a fun game - even though I never think I beat the original.  Since it was practically free to try on my Xbox, I thought: why not?

On the surface the game seems like a nice reboot of the original.  Updated graphics, updated music, and some additional mechanics like "gleam" (short term powered attacks) that should, in theory, make the game more fun.  However, the game was rather disappointing in most aspects.

The story is almost non-existent.  It starts off with Marian, the damsel in distress, getting kidnapped, and Billy and Jimmy Lee are off to rescue her.  The original game, in the 80s, had some constraints which didn't allow for storytelling that answered the: why was this person kidnapped?  And why the heck is there a skull-looking-person in space perpetrating this, but for a game released in 2012 there should have been a little more care taken for the story.  Even if you approached this as just a beat-em-up there are still technical issues that prevent this game from being a reimagined brawler.

It seems like hit/collision detection is really a problem with this game (as it was with some game of that era on gameboys and NESs).  Unless you're lined up almost perfectly you can't score a hit, but it seems like your enemies don't always suffer from that impediment.  Furthermore, when you lose all your lives you restart the game from the beginning of that stage, which is mildly infuriating.   I really wanted to get through to see if there is a payoff for the story, but I only got to level 3 (a space station), out of a total of 10 levels.  This is when I decided to give up (maybe around 7 hours of gameplay in total). 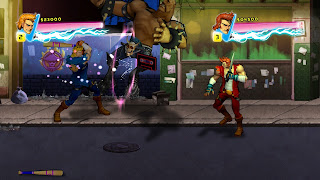 I do like the art of the game, and I absolutely love the music (to the point where I'd buy the soundtrack), but the game itself is just not all that enjoyable. In the end, this game is really a 4/10 for me, and most of the points are for the music :-)