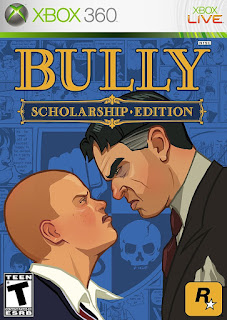 Well...it took about a year but it is done!  I had started Bully (a game which my friend Rob gave me before he left for lands far far away) last year just before classes started (EDDE 804 to be more specific).  Between school projects, work projects, side projects, and everything else, this game fell by the wayside for the most part; until this holiday when I had some more time to just finish the game off.

The game is an open world game in which you play the role of Jimmy Hopkins, a kid (maybe a bit of a troublemaker?) who gets dropped off at Bullworth Academy as she and her new husband (who seems to have quite a lot of money) are off on their honeymoon cruise.  Jimmy seems to be habitually neglected from his mother (from what I can tell) as she goes from marriage to marriage.  In any case, Bullworth isn't a place for him to straighten out, at least from the type of school it appears to be. Bullworth, early on in the game, is described as the place that educated politicians, mob bosses, corrupt business leaders, and other (let's call them "non-traditional") occupations.

The school is made up of various factions: the Geeks, the Greasers, the Jocks, and the rich Preppies. Each chapter in the game is about Jimmy's quest to subdue all of these elements and get those factions on his side. There are the main missions which push the plot forward, but there are interesting side missions which give you money, give you a little more backstory into certain characters, and give you additional skills.  One of the types of mini-games is going to classes.  You can cut classes if you want, but if you're busted you're returned to them.  If you pass your classes you end up with new abilities in the game such as better weapons, better health regeneration, smooth talking authority figures and taunting enemies, and so on. I continually tried to balance my need to pass all my classes (and be a model student) with moving the story forward (and cutting classes, just because I could).  Ultimately I fully completed my English, Art, Photography, Gym, Chemistry, and Geography courses, and I partly completed Shop (2/5), Biology (4/5), Music (4/5), and Math (3/5) courses.  That last music class was such a pain I almost rage quit ;-)

The mechanics of the game overall weren't that bad.  There was a lot of button-mashing while running, skateboarding, and biking to get around campus and the surrounding towns, but other than that the game didn't have anything that made it absurdly difficult (other than the left and right triggers for the percussion instruments which seemed a little off to me).

Overall I was about 63.50% complete with the game with 13/38 achievements earned.
I was thinking about just continuing playing, finishing all class mini-games, make people trip on marbles, earn money through lawn-mowing, and so on, but I thought I'd better play other games since the story was done.  Wonder if Jimmy will make his way into a future GTA game, considering that this game takes place within that universe.

Have you played it? What do you think?