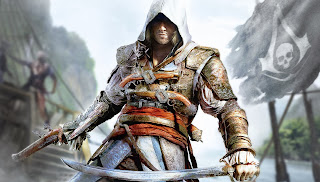 Just in time to end my holiday break and get back work, I completed Assassin's Creed 4!  I ended up getting AC4, like my previous 2 AC games, on Amazon.com's Black Friday/Cyber Monday deals for a reduced price.  I could have waited a few more months to get the game at less than half the price (factoring in a used cost), but I got it new for $30. Not too bad!

I liked this game quite a lot both for what happens in the game, as well as what happens outside of the game!  In the game you play as a nameless beta tester testing out Subject 17's genetic memories. Subject 17, as you will find out, is Desmond Miles.  I was looking forward to playing, again, as Desmond, until I was reminded that he died, or sacrificed himself, to save humanity.  In any case, in the Animus you play Edward Kenway, Haytham's father from AC: III, and you go through life initially stumbling on the whole assassin/templar thing, but in the end after having been on both sides of the war, he decides to stick to the assassin side of things.  In the animus you spend a lot of time getting from place to place on a ship you own, and as a pirate you get to be in naval battles and loot the cargo of ships you have destroyed.  The naval battles are actually pretty nice, and you can build up your ship as you get more money and loot.  By the end of the game I didn't have my ship fully upgraded (didn't do enough looting), thus I couldn't take on the four "legendary" ships that are really hard to beat, even with a ship more than 70% upgraded.  One thing I wish I knew, before I got to far into the game, was not to sell the raw materials I gathered from hunting.  I got very little money for it, and I missed out on crafting some special items.  I suppose I can go back and play some more, but I don't feel like it at the moment.

In the "real world" in AC:IV you get to play as an employee of Abstergo Entertainment. There are some familiar assassins who have infiltrated the game developer's headquarters and they are gathering information on what is found there.  What's funny here is that if you go an do all the computer hacking side missions you get a lot of inside jokes, such as Abstergo Employees discussing over email philosophical questions like "if we have an animus, and we can go anywhere in time, how about we use for educational purposes?"  Of course, anyone who has played any of the Assassin's Creed games, and has bothered to read the bios of the various characters, knows that there is a lot of historical reality inside this historical fiction game.

Another interesting thing, if you do the side missions, is that you get to learn more about the historical development of the animus, as well as a competing project within Abstergo, and you get to learn more about Subjects 0 and 1, who were, I guess, templars.  You also get to hear some of Desmond's last words before his doom in AC:III.  This ties in nicely with the iPad companion app that Ubisoft created for this game.  The companion app lets you view all of the media that you've accumulated in your game, including sticky notes (which I have collected but not read yet), manuscripts, listen to sea shanties and view or listen to all Abstergo artifacts, like the Subject 0 and 1 information which is all re-recorded from reel-to-reel tape.  The companion app also can act as a real-time map, so as you progress in the game you can have a second screen experience of setting waypoints and seeing the map without having to pause.  Pretty nifty, even though it sucked my battery try :)

Another interesting side of AC:IV is a companion AC website called AC: Initiates (ACInitiates.com) which allows you to explore the AC Universe outside of the game. There are some challenges in AC Initiates that you can start online (accept a challenge) and complete them in-game.  As you complete challenges you can earn XP toward your online character's experience, and (I think) you can unlock content.  As you complete AC games (all except for the original) you get credit for having played those as well toward your XP.  This is an interesting idea, and something that may entice me to go back and play AC:III again.  I've been holding off on getting DLC for my previous games since I don't know how much they will add to the story, but maybe if there is a DLC sale, I might take advantage of it and explore some of the side stories in previous games and earn some XP for initiates.

At the end, I got 32/60 achievements for this game, with a completion of more than 70% (which apparently is more than I had in previous AC games).  Nice game!  I really enjoyed it!  I am looking for ward to AC: III Liberation HD which is coming out in January, although I probably won't get it until next fall since I have a big backlog of games now.
Ο Φοβερός
See Older Posts...