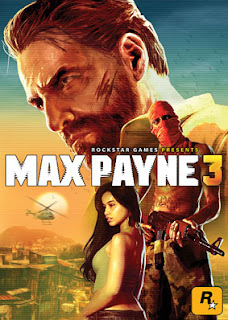 A week or so ago I completed Max Payne 3, the most recent game in the Max Payne series of games.  This game trades in the comic book feel of the first two games for a more new (or trendy?" cinematic feel with game cutscenes and voice over by none other than Max himself.

The game starts off with Max (at the end of the game) doing some introspection, a "how the hell did I get here?" type of mindset  - and the rest of the game unfolds in flashbacks.  Some flashbacks are "present day" (if we think of Max being in Brazil as the main part of the game), and some are in the past (in other words, how did Max get to Brazil?).

Long story short, Max is a drunk, dependent on painkillers to keep down his sorrows over his lost wife and child from the first game. He meets, just by chance (?) a former police academy classmate who is now working private security and who is looking to recruit. Why not? It's not like Max has anything better to do?  As Max drinks his pain away at the local dump bar some punks, who are mobster's offspring, come in and start harassing him (dude, you know what happened to the last ones that messed with Max, right?). Anyway, Max kills the stupid college kids, which gets his mob dad on Max's case, which eventually gets Max down to Brazil.  OK. In Brazil it should be pretty quiet, small protection detail, living the good life.  But...apparently there is police corruption, human body part trafficking, and political corruption.  It all basically goes to shit and Max goes all yippie ki-yay mofo! He cleans house, takes care of the corrupt police unit, the corrupt politician, and comes away with a bag of money to retire on... (or is there a sequel in the works?)

Despite what the games sins guy thinks (see video at the bottom), I liked this game.  I liked the mechanics, I liked the story, and I liked Max's commentary. He has some pretty nice zingers, and he does poke fun at himself for his pill addiction (which is basically his way of getting additional health in the game).  The game reminded me a little of modern third person shooter mechanics.  It handled well, and the bullet time is still a ton of fun.

In terms of achievements...I only earned 10 achievements (or 11% of the total), but whatever.  It was a fun story and a fun game.

Have you played it? What do you think?