Back for another installment of Vintage Technology! This time I thought I'd write a little bit about the Psion series of Personal Digital Assistants.  Psion didn't really hit my radar until around 2001, but by that time I think that the company had already started switching directions.

Back in 1995(ish) I am pretty sure that I remember seeing the Psion series 3, series 3a, and Sienna models being sold at the Staples (office supply store) that my dad's work was next to. I don't remember the specifics, but looking at these models now the flashy hardware rings a bell, even though I was only able to purchase a cheaper Casio organizer at the time (#sadTrombone) ;-).  All of these PDAs ran on the EPOC operating system (which some of you may know as the operating system that became Symbian later on). 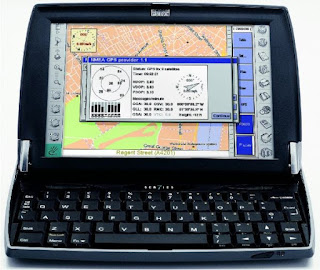 Finally, the Psion Series 7, which was actually the first device to use the term "netbook" came out (2000). This was a laptop format device which reminds me a lot of the Apple Newton eMate 300.  The device had a =StrongARM SA1100 at 133 MHz processor, 16 MB of RAM, a Compact Flash (CF) type II card slot, a PCMCIA card slot, a color scree (with touch) and a microphone.  Not bad.  The thing that I liked up to the 5mx was the portable clamshell design.  You could easily throw the device in a small bag and take it with you, and the keyboard seemed pretty comfortable for some word processing, jotting down notes, and surfing the web.  Despite the monochrome display.  The series 7, in comparison, seemed a little like a giant PDA.  At that point I felt like it was better to buy a laptop :-)

Every now and again I think to myself and ponder getting a 5mx for my collection of old PDAs, but the clamshell design is making me think twice about it because of the screen ribbon that connects the screen to the motherboard.  I've had too many devices whose screens ultimately fail to work because of bad ribbons and I don't feel like adding more non-functional clutter to my collection ;-)


Did you ever have one?  What did you think?