A while back, on Kickstarter, I had seen a campaign to fund a continuation of Stargate: Atlantis.  I was intrigued, but the campaign had already ended.  The other day, while browsing the sci-fi section of my local comic book store, I saw the first issue of this comic out.  I don't generally buy comics in their "floppy" form, and I opt instead of buying collections that are more in book form.  One of the reasons is that I generally hate the "to be continued" aspect of most comics. 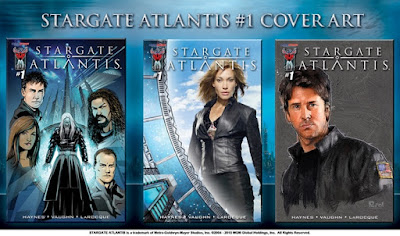 Regardless, though, I bit the bullet and decided to try it out (cheaper than a cup of coffee at Starbucks - not that I often buy coffee at starbucks...)  The story seems pretty interesting. There is a new enemy which we saw briefly the episode The Daedalus Variations.  Obviouly aliens from another dimension are invading this reality.  While we've seen cross-overs from other universes before in the series, I doubt that we've seen full scale invasions.  I can't recall if this is the subject of other sci-fi shows either.  Either way, it's pretty interesting as a concept.  The first comic was pretty engaging, so who knows - maybe I will be buying more of this.

Any other stargate fans out there?  Did you read it? what do you think?
Ο Φοβερός
See Older Posts...