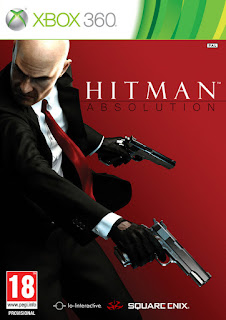 It seems like it took a while to finish this game, but it was a pretty good game (so no complaints here).  Last I left Agent 47 he was being laid to rest as and the FBI director was pretty pleased with himself that he got Dianna to turn and get 47 captured (or killed).  The game ended with a faint heartbeat that kicked in once Dianna placed his two signature weapons (his Ballers) in his hands.

I was expecting Absolution to start from this point on.  What did 47 do after he woke up?  How did he get back with the Agency?  How did the Agency reconstitute itself?  Well, I guess I don't know.  Absolution starts with a contract being placed on Dianna (who is quite well guarded).  Agent 47 is sent in to eliminate her, which to me was really odd.  Really 47?  Really? You are going to take out Dianna, your old pal? The one who resurrected you at the end of the previous game?  WTH man?

In any case, it seems that 47 does indeed kill Dianna, but she had left a note for him.  There was a little girl who she was protecting, who like 47 is genetically engineered to be an assassin.  Dianna asks him to take care of her and ensure that she has the childhood that 47 was robbed of (due to the Agency).  The story of Absolution takes place in 3 parts, starting with saving Victoria (the little girl), then losing her to abduction, and then saving her again.  During this time he takes care to clean up town of corrupt officials, corrupt cops, and ultimately the Agency.  Throughout this story we see a city cop, just a regular Joe cop who had been following this ghost assassin throughout the years.  He doesn't know him but he really wants to apprehend this suspect.  Just like Robert Murtaugh in Lethal Weapon I expect this character to eventually say "I'm getting too old for this..."  Nothing much comes from this storyline, but it seems like something ripe for exploration in a future game or novel.

In terms of achievements I did way better in this game compared to other games, even though I completely blew the stealth missions and got myself into way too many gunfights.  I got 29/46 achievements, or 63% of the total achievements for 470/1000 points.  Not bad! This actually is making consider going back and replaying the series from the beginning.