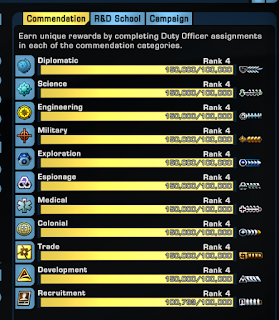 After close to 5 years of playing this Star Trek Online (since it went Free to Play basically) my primary character (Tolya Kotrolya) has finally maxed out all of his commendations!  The elusive commendation was the "recruitment" commendation which for the Federation folk it seems pretty hard to get (unless you want to sacrifice a whole bunch of uncommon and rare Duty Offices to trade them in for something higher in rarity).  Comparatively both my KDF-faction character and my Romulan-faction character were able to complete all commendations relatively quickly (a few year ago!)

So how did I get the to the final stretch?  Two ways - buy Refugee characters from the exchange for recruitment missions (which from a symbolic perspective this is pretty disconcerting - if you really think about it), do some colonization missions which give a little recruitment XP as well, and I broke down and traded under-perfoming  duty officers for higher rarity ones.  Took a while, but it worked!  I guess now I just need to go through and earn some other accolades that I've put off over the years - such as the exploration ones. All this, thought, is making me think that I keep getting further and further entrenched in my main character. No matter how much I like my other characters (KDF, Romulan, Delta Recruit, Temporal Agent) there is too much invested in the main character to give them up.