The Apple Newton is one of those devices that I had been keeping my eyes on for a while.  I wasn't sure when the original device was released - the original messagepad - but I know that it was out in the market when I came back from Greece.  While I was in Greece I couldn't really afford to spend money on computer magazines, as much as I wanted to just drool over the latest and greatest tech, however when I moved back $12 per month at the news stand wasn't bad (and you got a CD with your magazine!).  I started reading MacWorld and MacAddict, and on occasion MacUser.  This was my primary window into the world of the Apple Newton.

What was great about the Apple Newton was how much stuff it seemed to be able to do in such a small form factor.  It could take notes, play back video (!), record voice notes,  play games, and even connect to the internet!  It was really one of those devices that you aspired to have one day, and it was smaller than comparable devices like the Sony MagicLink series that I've written about previously in this Vintage Tech flashback ;-)

The MessagePad that I was first introduced to was the Newton 120.  This makes sense since wikipedia cites it as having been released in October 1994, which would have been a few months after my return.  The 120 has a 20Mhz ARM 610 processor, which was only around 13Mhz less than my first desktop computer at the time, 2MB of RAM, a 320x240 monochrome display (again, compared to desktops of the time, what I was running was 640x480!), and a PC-card slot for expandability.  This little marvel ran on 4 simple AA batteries! Of course, at $600 when it was released I could not afford it as a high school student, so I could just dream.  Comparably my first computer actually cost around $1600 (after some discounts and sales) for a full computer at the time, so it was a no-brainer what I should buy "for school" ;-)

Sadly, when Jobs came back to Apple the Newton division was spun off, reabsorbed, and then the product was put on the shelf in order to focus on the core business, since Apple at the time was having some serious issues!  By the time I graduated high school, got a job, and was able to save up to afford a newton it was quite dead!  That didn't stop me though!  In college I saved up, and thanks to eBay I bought my first 120 for around $100, which was a steal compared to what the thing originally cost a few years before.  I installed a variety of application on it, both free and paid.  One of the applications that really was helpful was a multilingual dictionary. This came in handy since I was an Italian and German minor in college!  In my mind I was like Zach Morris (from saved by the bell), looking cool with his giant mobile phone on campus (I probably looked like a dork :p ).

Later on I gave my 120 to a friend (a fellow classic computing enthusiast) and I was able to find a decently priced Newton 2100 on ebay (up to that point they were all more then $300 which didn't seem like a good deal).  The 2100 units were powered by a 162Mhz StrongARM processor, they had 4MB of RAM, 2 PCMCIA slots, 480x320 monochrome display, and it was still powered by 4AA batteries! Simply amazing!   I used that unit for a number of years, and people still use theirs, however with more and more of my contacts being Greek, I needed to switch from Greeklish (using latin characters to write in Greek) to actual Greek text.  The NewtonOS supported unicode fully - a great feat for the early-to-late 90s, but sadly Greek wasn't programmed into it. So the utility of keeping the newton as my personal information manager really greatly diminished.  I still have my 2100 though, even though I don't use it much any longer.  I have pulled it out to  try out browsing the web, blogging, and tweeting from it  from time to time - just to say that I can!

Another form factor that Apple tried out with the NewtonOS was the clamshell laptop (we later saw a similar design running MacOS).  This device was meant to be used in a classroom setting, which the eMates receiving programming from the instructor.  Here we can see some early innovations in eBooks.  While this didn't work out in the end, some concepts we see carried to today in smartphones and ebook readers.  When I was in college I ended up creating several ebooks, grammar references, which I loaded onto my 2100 so that I can reference them during class and when I was doing my homework. The eMate was slow, compared to the 2100, with a 25Mhz ARM 710 processor, and 1MB of RAM.  This model didn't run off AA batteries but had a laptop-style battery.  The 2100 could use a laptop-style battery, but it could also run off AAs. 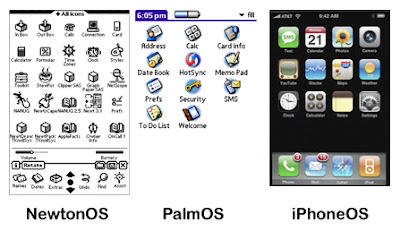 Later on, when Apple released the iPhone, one might see some influences of NewtonOS there, but today (for me anyway) the NewtonOS is gone.  I do wonder if someone were to revive it what it would look like modernized for a smartphone (and a finger-first interface)...