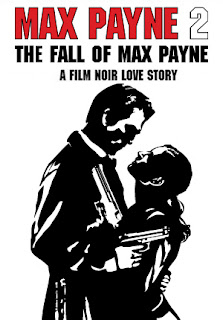 Continuing on the theme of going through video games that I've wanted to play (but haven't), the next game that I completed was Max Payne 2: The Fall of Max Payne.  This game was originally released on the original xbox (you know, the one before the xbox 360), and it is backward compatible on the 360, so I decided to take it for a spin.  [SPOILERS]

The story of Max Payne 2 picks up a little after the end of the first game (well, two years later).  Max leaves the DEA and goes back to the NYPD.  Here he is investigating a case that brings back some familiar faces, including his love interest, Mona.  In this game Max saves Lem (Russian mobster) from his supposed enemy, however, as the game unfolds we see that Lem is basically the bad guy in this game trying to take top spot's in NY's crime organizations by taking out the members of inner circle, including Senator Woden (from the first game) who is now frail and has one foot in the grave. We find out that Mona was hired by Woden to kill Lem and Max, but in the end she falls in love and can't do it. Oh yeah, Max's detective partner was Lem's significant other, so she was in the mole in the police department.  In the end Max kills Lem, Woden is dead (he didn't have long to live anyway), Max's partner is dead, and Mona is dead; although at the ending at the hardest difficulty (according to wikipedia) Mona lives. I suspect that the canon ending for this game is that Mona dies.

The game retains the noir feeling of the first game, with the gruff voice-over and the comic book cutscenes.  I actually liked the story telling quite a lot.  It also retained the dream sequences from the first one, but I preferred the ones in this game much more to the first (it didn't really make sense to me why someone would die if they didn't fell off the blood path in the delirium sequences of the first game). The graphics, as was expected, were quite better than the first one (wheels actually moved this time around!). The graphics were still blocky, but not as much as the first game.

In terms of gameplay, the first thing that threw me off with the controls was the inverted axis controls as a default.  Once I fixed that I was no longer fumbling around like a drunk person. There still is quite a lot of bullettime in this game (although it took me a while to find the jump-bulletitme).

The one critique that I have of the game is the visiting of the same locations over and over again.  It was nice to revisit some locations from the first game as it provides for continuity, but as the game progressed I felt like I was constantly going back to the damn abandoned fun house.

Have you played this game?  What did you think?
Ο Φοβερός
See Older Posts...