My most recent ubuntu experiment

I've been experimenting with Linux on and off since 1999.  I was first introduced to linux when I was working at Barnes and Noble and I was working on the textbook floor with a number of other computer geeks. I think the first distro that I heard of was Slackware, but I don't think I have actually ever actually installed slackware.  I remember seeing their software boxes at stores like MicroCenter and CompuUSA when I was in High School.

When I started my bachelor's degree in computer science we used to telnet into our school's server, a Sun machine, to write, run, and test Java applications.  If I had the money I would have most likely bought a sunbox (I actually did later on, but gave it up since I had no space).  In the meantime, in order to facilitate my coding I decided to purchase LinuxPPC - a distribution which ran on PowerPC based computers, including my Blue and White G3. After I completely formatted my hard drive, installed linux on one partition, and MacOS 9 on another, and got cranking on setting things up. The experiment didn't last long One of the main issues I discovered were drivers - LinuxPPC didn't really support the G3 all that well, and I couldn't get online with my 56k modem.  The linux partition went dormant until I installed MacOS X on it a couple of years later.

I did continue to experiment with SuSE linux on a Virtual PC on my Mac to continue to learn more about linux, but it was more of a hobby - not something that would really replace my day to day OS.  Over the years I have gone through and tested Red Hat, and subsequently Fedora, older versions of Ubuntu, and various smaller distros and live CDs.  Nothing really has swayed me to switch. About six months ago the Linux Foundation had a MOOC on EdX as an introduction to linux. I signed up to see what it was all about and it piqued my curiosity again and Windows 8 was increasingly annoying on my secondary work PC. It would go through a cycle of updates, only to fail, and reboot, until the next time it wanted to try updating where the process would start again. Microsoft bungled the update from 8.0 to 8.1 on enterprise, and as an early adopter I felt the pain.  If I was going to have to erase and reinstall everything, I might as well try out linux again. I decided to retry Fedora and Ubuntu.  After some hickups I got Ubuntu running and it's been a couple of months now as my daily secondary machine - running on a Dell GX620 (standard hardware config). 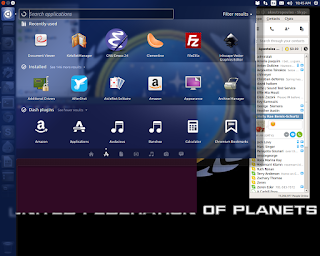 Thus far I've been able to do everything I did on Windows with this linux machine  - since most of it involves dropbox, documents, email, and chat clients and skype.  The one thing that I felt adventurous about trying was trying to get the department's scansnap ix500 scanner to work with it. I didn't use it on Windows, but I thought it might be good to have this scanner setup in case I needed it to work.  I had marginal success in getting it to work.  The linux software that I got for it produced poor quality scans, and the windows software that came with it did not work with WINE. I did get the software to install, I just couldn't get the scanner recognized after the software was installed.

Things seem OK thus far. I think that I can make Ubuntu work as a work machine - at least for the things I use my secondary "email" computer (which is usually underpowered hardware anyway).  The one issue that cropped up this week is the curse of the update.  Updates on ubuntu, thus far, have been seamless. The update client pops up, says that there are new updates, you click update, and you're done.  Now I am getting an error indicating that I cannot update because my /boot partition is full.  I've done some cursory checks and it seems that old kernel files are to blame.  I need to get those removed in order to be able to update the system. Ugh... will update issues be the end of ubuntu as well? hehehe.  Maybe I'll spend part of my summer troubleshooting this and getting more familiar with linux - after May and graduation are done at work.  The silver lining is that this is the longest I've ever used any linux since I started back in 1999.
Ο Φοβερός
See Older Posts...