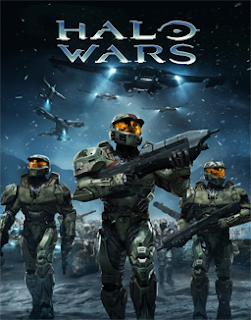 This past weekend (and after about 20 hours of playtime) I finished Halo Wars on the xbox 360. I've been kind of avoiding Halo Wars because it's an RTS game (real time strategy) and I haven't really gotten very much into an RTS since Warcraft II: The tides of darkness (which I played back in 1996 on my Performa 635).  In this game, unlike most other Halo games, your protagonist is just a regular Joe Grunt, named Sgt. Forge.  Not an ODST, and certainly not a Spartan.  While there are Spartans (and ODSTs) in the game, the person that is pulling it all together is a regular marine.

The basic gist of the story is that the carrier vessel called the Spirit of Fire, is sent to a couple of planets that are under covenant attack.  They clean house and evacuate civilians, and fight back some of the covenant, but their scientist (who can decipher Forerunner code) gets abducted by the covenant so that they can get access to the Forerunner's arsenal of weapons (big ships that can blow away humanity).  So, the Spirit of Fire and with it Sgt. Forge try to head them off and stop this. In the end (of course) you are successful in blowing up the Forerunner facility (well, you blow up the sun in the middle of that Dyson sphere, which annihilated everything in it) so you save the day.  The thing that rubbed me the wrong way was that your main character (Forge) actually sacrifices himself for this.  Argh.  Not again! Same thing happened in Halo: Reach.  Why kill of the protagonist?

The game play seems pretty standard RTS (at least from what I remember from the last time I played an RTS).  Build a base, improve the base, make some soldiers (of different classes), defend you base, and dominate over the enemy faction by destroying their bases.  The game play was pretty good, and I think the team did a pretty good job of making an RTS work with a game controller.  The only thing I really didn't like about the game mechanics was the amnesia that the game has from stage to stage.  In each stage you need to "research" things like being able to have more troops, or having a higher yield on your missile strikes, or being able to train ODSTs.  Perhaps "research" was a poor choice of wording in the game.  Maybe having a different level of base would allow you to accommodate some of these things better than a lower level base, but in reality once you've researched ODST training in an earlier level, it should be available from the start of the next level.

In terms of achievements: 7 achievements earned, making for 250/1200 points, or 21% of the total.  I was mostly interested in the story, and not the grind to earn more achievements.  Maybe in about 10 years I'll come back to this :p  Overall, the game was a solid 8/10 for me. 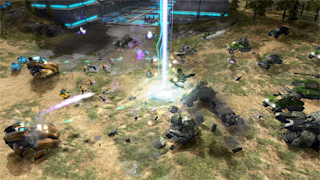