Hey there!  Remember Lechmere? Well, chances are that if you did not grow up in New England you probably don't know what the heck it is, but around here it seemed like a big deal. The chain of stores went out of business in 1997, and a BJ's wholesale store was erected in the former Lechmere location

When I moved back to the US (oh yes, this is a #metanastis cross-post that I should translate to Greek at some point...) my dad and I used to go to the Dedham Lechmere, which was located on Route 1 at the time.  The store was a department store, from what I remember, and it had appliances, tools, technological items, and - must more to my interest - video games! My dad went there for tools of his trade, he was an auto-mechanic, and I ended up seeing things that were of interest to me.

In any case, back in 1997 when Lechmere was liquidating its stock and "everything had to go!" at "low low low prices", I got very excited.  Some of the items that Lechmere had were Atari Jaguars, 3DO consoles, and things that were called "PDAs"!  One of the PDAs that caught my eye was the Sony Magic Link.  The Sony Magic Link is pretty huge, but today's standards, but back then it was amazing to see a portable computer of that sort being so small and compact (LOL).  The model that  was on display when Lechmere was liquidating was the PIC-1000 model, which was already a few years old.  The disappointing thing was that the liquidation price was not really that "low low low" since the PDA was something like $300 (definitely out of my price range as a high school student).

The device was pretty cool, nevertheless.  It ran on six AAA batteries (or a camera battery from what I gather) which is pretty interesting to consider, given that all devices these days seem to run on batteries specially made for those device, and they are hidden away in their own special compartments.  The touch screen was stylus-based, as many of the devices were prior to the iPhone, and it had a gray scale display (as you will see in the video) that was 480x320.  This wasn't bad considering my own desktop at the time was 640x480, so not bad for a portable device with a touch screen! The processor, at least on the PIC-1000 was a 16 Mhz motorola dragon 68349, which tells me noting other than... "wow" since my desktop at the time was a 33 Mhz processor!  In terms of expansion you were able to install application on this device through PC connectivity, and you had some standard and not-so-standard ports.  The device sported 1 PC-Card port (for memory expansion), 1 IR port (LOL), a telephone port (which I assume is a modem), and two proprietary ports: the "telecom" port and the "magic port", which according to the manual were used for peripherals, such as the keyboard, which was bigger than the unit itself!  Trying to compose emails with the touch screen must have been excruciating :-)

The operating system on this device was General Magic's MagicCap, which had I take it that Cap stood for "Communicating Applications Platform". This, if I remember correctly, was a join venture between Apple and Sony, so the Magic Link was compatible with both Windows and Mac computers, which was a plus for me back then...if I could afford one of these units ;-).  I have a feeling that if I had one of them I'd be like Zach Morris on Saved by the Bell with his giant motorola cell phone hahaha.

The metaphor used by this operating system was the desktop and the real world.  The desktop was quite literal. You could see your rolodex, your fax machine, your inbox and outbox, you calendar and so on.  Then you could walk out into he hallway and visit other places in the workplace where you would have filing cabinets, closets, and other things like that.  It was an interesting metaphor, but I think it was a little hard to get used to it.  If you look around at abandonware sites you might actually be able to find MagicCap for windows, which was basically the OS that you could run in application form under windows and accomplish the same things. as you would with the Magic Link.  Back then you'd have to buy mail clients, clients for connecting to AOL and compuserve, calendar apps, and all that separately, so having it all in one place and, if you used the PDA as well, having the same interface, was a big plus.

There were other devices other than the PIC-1000.  Sony made the PIC-2000 which added a second PCMCIA slot and backlighting. It also ran version 1.5 of the OS.  Other companies, like motorola also had their own MagicCap based devices, like the data rover. 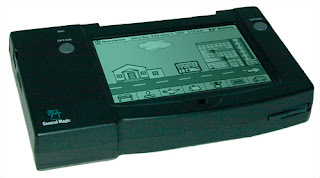 The data rover 840 (aka "apollo") reminds me a little of the Apple Newton (subject of a future post) in the way it looks. This one also supported version 3.0 of the operating system. I wonder if they skipped over 2.0, in the way palm OS sabotaged their own PalmOS 6 by the way they kept hyping "cobalt" (aka PalmOS 7)...

One of the Data rovers (440, aka "gemini") also looked like they had a clamshell design. I think that even though it looks more advanced it had fewer features. 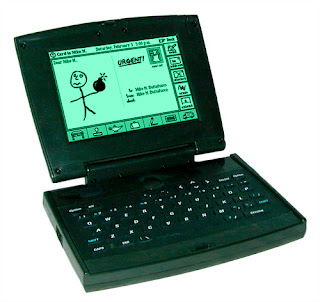 
The amazing thing is that these guys were working on smartphones even back in 1995!  Have a look at this interesting demonstration from the folks at General Magic

So, did you ever use one of these? What did you think?
Ο Φοβερός
See Older Posts...