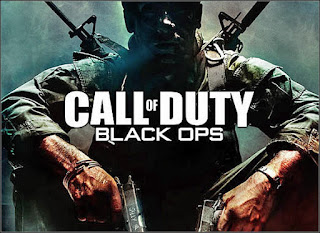 I guess I needed a little entertainment this semester so I couldn't give up all gaming ;-)  A while back I got a good deal on Call of Duty Black Ops and Black Ops II so I ended up starting to play Black Ops a few weeks ago during the winter break, before the semester started.

Having finished 4 other Call of Duty games, the mechanics of this game felt pretty familiar.   The game is pretty interesting.  The story is told pretty much through a flashback.  You play the role of Mason (for the most part) who is a CIA operative.  It's the 1960s, the cold war is happening, and the first mission you're sent off to is to kill Fidel Castro in Cuba.  That doesn't go so well and you are captured and sent to a gulag in soviet Russia.  There you meet Victor Reznov (another prisoner). A rebellion of prisoners is incited, you escape, but Reznov is unable to escape with you.  You then go through some additional missions in Vietnam (during the Tet offensive I think), Kazakhstan, and a few other locations. You are basically hunting down Dragovich, a soviet with some incredible power, who has sleeper cells all over the US.  But these aren't any old sleeper cells, oh no!  They've got access to some compound called Nova 6, a toxic gas that the Nazis developed, and the Soviets took from them at the end of World War II, and the Soviets plan on using it during their invasion of the US.

Near the end we find our protagonist from two perspectives.  His own narrative tells that Reznov killed Steiner (the scientist who knew about Nova 6), but the CIA team that  witnessed it saw Mason kill him.  What happened?  In a major WTF moment we find that Dragovich has brainwashed Mason and programmed him to kill president Kennedy, but Reznov reserve engineered that mental programming to get Mason to kill Dragovich and others that had harmed him.  So, even though Mason actually killed them, he saw Reznov doing it (woah!) Talk about a mind bender!  Once Mason finally remembers how to crack the frequency that the soviets are using, we are taken on a final assault to take down an interim station (under the sea) which will serve as a base for the submarine unit of the soviets during the planned invasion.  Mason and his team do short work of this underwater base... the end! Or... is it? In the post-credit scenes we see Mason in the background as Kennedy goes to Texas...did Mason kill Kennedy?  I guess we won't know.

In terms of scores, I ended up grabbing 16 out of 71 achievements (only that many?) for a total of 245 our of 1700 points.  M'eh.  That's fine ;-)  It was an enjoyable game and it was quite immersive, with a lot of WTF moments, so I might just go back and play some more later.

The post-credit scene was also pretty funny.  You see JFK, Nixon, McNamara, and Fidel Castro after the Bay of Pigs fiasco.  You see them all talking in a collegial manner when ... zombies start attacking (WTF?!). That's when you become JFK and start taking down zombies.  Very odd, but interesting. I wonder if they do anything with this in the second one.