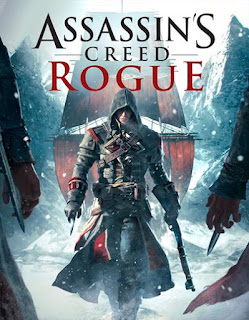 Well, I've finished the last Xbox360 Assassin's Creed (that I know of):  Assassin's Creed: Rogue! From what I can see, Assassin's Creed: Unity, and Assassin's Creed: Syndicate are only on next-gen consoles (xbox one and PS4) and PC so it will be a while before I play those.  While I could play then now on a PC, I prefer to leave the PC for the two MMORPGs that I play (Star Trek: Online, and Defiance).  Anyway, back to Rogue!

Assassin's Creed Rogue (ACR) takes place during the French and Indian War.  The game bridges the events that happen in Assassin's Creed: Black Flag,  Assassin's Creed: Freedom Cry, Assassin's Creed III, and there are even hints of characters to come from Assassin's Creed: Unit.  The protagonist of ACR is Shay Patrick Cormac who starts off as an assassin.  The game's events take place in New York City, in the North Atlantic, and in the River Valley. There is also a brief encounter in a location that is meant to be Lisbon, Portugal.

It seems like the Assassins are not infallible, and the  discovery of precursor sites has caused geological instabilities that cause massive destruction. In the game the earthquake that devastated Lisbon is the example you play through.  The Assassins want to continue exploring, but Shay, thinking of the humanitarian catastrophe tries to stop them.  He is injured and nursed back to health by the family of a fallen templar.  He then join the Templar order, where we see familiar characters such as Haytham Kenway and Captain Cook. In the end Shay is a large cog in the machine responsible for the dismemberment of the Assassin Order and the state of the world when ACIII starts.  Achilles recognizes the folly of his ways, but it's too late for the order at that point. Throughout the game, once you switch sides to the Templars, the Assassin Order is shown as "gangs", with an off-handed comment made to gangs of New York.  Other notable characters that you see (to some extent) on screen are Adewale and Arno (as a child).

So, what are the game mechanics like?  Well, this game has been described as a continuation, or an expansion, to Black Flag, which - to some extend, does make sense considering the time in which it takes place.  There are more sea-battles, sort of like Black Flag and ACIII. You do own a ship, the Morrigan, and you do get to upgrade it.  You do get to loot other ships, and if you overdo it, you have bounty hunters after you.  I did enjoy the naval battles, and the sea shanties are actually quite catchy  - I've caught myself more than one thinking about one and tapping my foot to the rhythm during my commute to work while playing this game.  The travel-by-sea is a bit boring, but then again, I count myself lucky that animus travel is not real-time travel.  I suspect that traveling from New York to Halifax would take way longer in a sail ship than the game shows us.

Another interesting game play mechanic: swimming in cold waters makes you lose health. You know, this makes a lot of sense!  I really didn't get why Altair could not swim (you desynchronized if you fell in water), and starting with Assassin's Creed 2 you could swim (yay!), but swimming in the frigid waters of the North Atlantic should impact your health.

This game also had some interesting new inventions by Ben Franklin, including a grenade launcher.  I think it would not be an AC game without new inventions - Leonardo Davinci in AC2 made sure of this!  Continuing on, another interesting mechanic in the game, once you've become a templar, there are assassin's hiding in various places in settlements and cities.  You know they are around because you hear whispering.  You can activate Eaglevision to discover their hidden locations and take them out before they attack you.  Their attack takes away half (or slightly more than half) of your life.

At the end of game there was a WTF moment, where the templars at Abstergo entertainment basically congratulate you for seeing the truth and they basically let the cat out of the bag that they are templars, and that the boss is a descendant of Shay.  The game ends in a choice (which you don't get to make).  The Abstergo entertainment boss basically tells you that you are basically welcome to the Templar order...or you die. WTF?

On a side note, I like how Abstergo, errr... I mean Ubisoft, poke fun at themselves. The real-life/present environments of Abstergo entrainment are also pretty interesting.

My big questions is this: Who the heck are you in real life? Who is the Abstergo programmer?We see this character (I assume it's the same one) in a variety of AC games after Desmond dies, but we never see who he is.  Is this person an Assassin spy? Is this person someone who will be recruited to the order?  It it just some random programmer who is unaffiliated? Or, is there yet a third faction that we have not seen on screen yet?

This game seems to hint that one side of this battle is not infallible. As one order gains greater power it seems like they become a little corrupt and don't quite follow their various beliefs.  I am interested to see how this series continues to unfold story-wise.

In terms of achievements earned in this game, I got 17 our of 46 (360/1000 points) - or 37%.  Not bad for mainly focusing on the story missions of the game and not really playing a lot of the extra stuff, such as exploring every single location in the world, synchronizing every view point, gathering all collectables, and so on. I actually did make a concerted effort to capture all the forts and all of the gang controlled zones so that I have all of the economic zones under my control.  I also got about 20% done with the shipping/commerce mini-game, and I think I fixed all of the computers in "real life" in the Abstergo headquarters before I decided to call this one done and move on to another game.

There is still oodles of whaling to do, many places to renovate, costumes to unlock, precursor sites to discover.  I think I will leave that for a later date - just as I did with Assassin's Creed Black Flag. Getting to 100% completion does not matter at the moment - I really want some nice story.  If the additional components moved the story forward I'd do it.
Ο Φοβερός
See Older Posts...