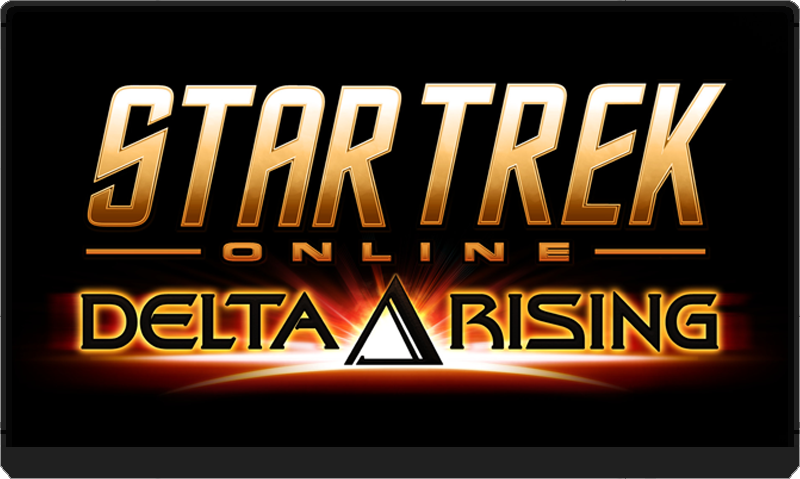 It's been a couple of months since the release of Delta Rising, the second expansion to Star Trek Online, and I've been playing, slowly but surely, through the content and the reputation XP (while still keeping track of my research reputation).  I'm seeing that this week will see the release of Q's winter wonderland, so before that hits, and I start fighting snowmen, I think it's an opportunity to jot down some thoughts on Delta Rising.

The story brings back some familiar Star Trek Voyager characters, such as Tuvok (now an Admiral), Harry Kim (now a Captain), the Doctor (does he have a rank? He should be at least a Commander IMHO), Seven of Nine (with a horrible catsuit again) and Neelix.  The idea is [spoilers ahead] that a race called the Vaadwaur have started attacking various species around the Delta Quadrant and the various faction expeditionary forces are coming in to assist the various friendly species of the delta quadrant, including talaxians, liberated borg, kabali, and so on.  It's an interesting expansion, and it does allow your character to level up to level 6, a fleet admiral.  Conceptually I have an issue with this.  While I do like bring a 5-pip admiral, how many of those can exist in a game?  And if I am only commanding one ship, what sort of fleet am I commanding? Not to mention the fact that I am already part of a fleet (player guild) so that's a bit confusing. I tend to not think about it a lot though.

Along with level 60, you get new abilities.  With each level you earn you have the ability to put the XP toward new ability trees, similar to what you see in other RPGs. This is nice, but it really makes the level 1-50 tree see quite antiquated (and useless).  I hope that in future iterations they get rid of the old "skill tree" and revamp it.  Through game play I've been able to level up 2 out of 3 characters to level 60.  Through chapter play throughs, exploration zone missions, and through DOFF missions (you'd be amazed how much XP these give for little work during the week).  The final character, the KDF character, is at level 58 and slowly leveling up. The XP required to level up at these higher levels seems astronomical, and not something you'd get a sufficient amount from just playing the chapter content.  I ended up skipping some of the chapter content which was patrol missions through the various systems in the delta quadrant.  I played through on my main character, but on the other two the cost (time put in) for the benefit (gear and XP) didn't seem worth it. I'd probably get more XP going to the Undine Space Zone and grinding through that over a a weekend.

The Delta reputation system is structured like the previous reputation systems. I got through with one character, and now I am going through with the other two (via sponsorship tokens).  All gear required some sort of equivalent to the Borg Neural Tube (forget what it's called now - ancient power cell seems to ring a bell) and you can only get these through advanced and elite queued content.  This is a bit of a pain because I only really PUG (pick-up group) for queued content and it's really hit or miss.  The Borg queued events (for the Borg reputation gear) also became much more difficult, less PUG-friendly, and as a consequence I almost gave up on Borg-rep gear.  I've discovered that more experienced players (and those with more DPS) tend to play on weekends and sometimes nights, so I tend to focus my last Borg-playing missions then.  I only need 4 more neural tubes for one last piece of gear, so I am almost there!

I did not get the Delta Pack.  As much as I wanted to, my T5 and a couple of T5U ships work pretty well for all content (with the exception of the Elite missions where nothing will work well if your team stinks), so go for it?

All things considered this isn't a bad expansion. I just wish there were easier/quicker ways to get reputation marks for gear.  Oh well, I guess I'll be raising some winter epohhs this year again for marks :)

And here's the trailer for the expansion:
Ο Φοβερός
See Older Posts...