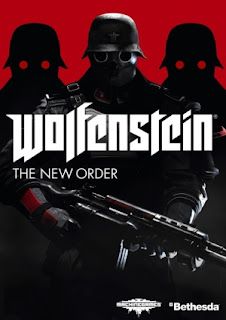 Compared to how long it took me to finish Bully, Wolfenstein: the new order on the xbox 360 took almost no time to complete.  The game is a fast-paced first person shooter (action obviously) which takes place in an alternative 1960 timeline in which Nazi Germany has won World War II and has gone on to become the super power of the planet.  It is a bit like the TV show the man in the high castle in that sense, however this game goes much more into a mecha and cyborg future for the 60s whereas in the TV show technological development seems more in pace with what happened in actual life. Another difference, in the game Greece, Sicily, Sardinia, Corsica, a considerable part of the Balkans, and North Africa appear to have resisted the Reich (whereas in the TV show they've fallen and become part of the Reich).

In any case, the game starts in WWII, you play the role of BJ  Blazkowicz on a mission to take out death's head, something happens, he seems vegetative (although the narration seems more like he is trapped in his own body), and is put in an asylum in Poland. Time flies, it's the 60s. Nazis come to take people from the asylum (to experiment on them I think), Blazkowicz regains his facilities, and he's off killing Nazis and looking for the resistance (and still wants to  take care of unfinished business with death's head).

The game play is a pretty straight forward shooter where Blazkowicz kicks some serious Nazi ass. In the process he goes to Berlin, London, under the sea to steal a U-Boat, and even to the Moon (yes, the Nazis have a Moon base).  While I loved blowing things up in this game and being the good resistance fighter there were some things that really (really) nagged at me. 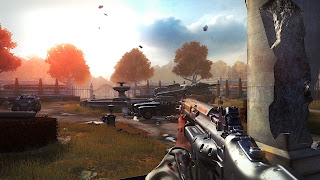 Blazkowicz collects armor from fallen Nazi soldiers (cool).  Blazkowicz masquerades as a Nazi scientist to get to the moon base (cool). Once on the moon base he changes to his regular clothes, tipping off enemies that he is no who he claimed to be and all hell breaks loose.  Why not take a leaf from Agent 47 and use uniforms he finds to blend in?  Yes, it would be a different type of game (not the shotgun to the face type of game it is), but I think it would continue the story just as well.  This game was also a little Duke Nukem-y in some areas (for example I wouldn't expect a Wolfenstein game to have actual sex in it, not that you see anything you wouldn't see in a movie, but it doesn't really seem Wolfensteiny).

Another thing that was a bit of an issue was the final boss. Blazkowicz found a super cool armor under the sea which he never uses, but in the end Caroline is seen using it, and not Blazkowicz .  Fine, Caroline lost the use of her legs and the armor allows her to walk again.  But, that armor would have made the final boss battle a non-issue, whereas in order to beat it I needed to hide away in a nook where Death's head couldn't shoot at me, but I could shoot at his mecha.  Feels a little cheap, but it got the job done.

Finally, the BIG WTF moment comes at the end where it appears that Blazkowicz dies.  Death's head, not content to be taken down, takes out a grenade in his final moments when he is near Blazkowicz.  Blazkowicz  miraculously survives (although he does seem to need some serious patchwork as his abdomen seems open) and he gives the order to level the death's head facility - with him in it!  This is the guy who survived 16 levels of insanity only to dies like this? WTF? Hopefully this is answered in the sequel and we don't get a "good man Blazkowicz. He died for the cause".

Overall the game was fun to play (maybe it deserves a replay) but the ending was a huge downer.  One of the finer details in the game is that Blazkowicz, in the Berlin safe house, can go to sleep at a specific spot and an original DOS version of Wolfenstein comes up and is available to play.  Not bad!  Wonder what happens if you finish that game in this game?