End of the Iconian War 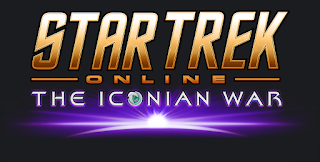 Well, the end of the Iconian War is upon us!  The story arc that started with New Romulus a couple of years ago is now seeing its conclusion.  During this arc we've explored ruins under New Romulus, we've discovered Dyson Spheres (two of them, in-fact) we've fought the Elachi, the Hirogen, the Undine, the Voth,... and the Iconians (wow, that's a lot of people to fight), and we've re-discovered the Krenim and their timeships.

The latter part of this game's season saw a lot of moral questions about whether it is right to just go in an obliterate whole civilizations from history just to eliminate one pervasive threat.  The kicker here is that [spoiler] the alliance, - well Sela specifically - is really responsible for this entire Iconian War!  See, Sela, Kargan, your Captain, and others head back 200,000 years ago to Iconia to eliminate the Iconians back them (desperate measure after getting their rear ends handed to them in orbit around Earth).  The Iconians seem to be the Federation of the olden times, where they support other, less technology advanced, species, but they won't interfere with their natural development.  The flesh-and-blood Iconians also look a lot like the Asgard from Stargate (just taller).

Well, while your team is there, the Iconians are attacked by other species with whom they have refused to share technology (due to their prime directive equivalent), and you help them evacuate.  Sela, however, is upset at all of the destruction and only allows 12 Iconians to escape to safety, the rest perish.  Wonk-Wonk!  Sela ends up causing the whole damned war...if only they had saved all Iconians...

Your team is then beamed to the present, where you meet with the Iconians, now in their energy form (they look inspired by Taelons from Earth Final Conflict), and you give them back their Orb of Wisdom which they had thought lost after that kerfuffle 200,000 years ago.  They recognize that you helped them back then, and this whole time paradox thing, so they cease their attack and go back into seclusion while they deal with what they need to deal with.  -The End.

This season wasn't bad.  The Iconians were pretty powerful early on, the first few missions I needed to respawn a few times to complete.  The most annoying thing about midnight, this last episode in the Iconian Arc, was the "wait for Sela to stop talking" or the "wait for Kargan to stop talking".  When I played it the first couple of times I did listen to the entire dialogue. However with 3 more alts, and re-playing this mission each week to get the new gear (the Sol Defense space set), means that I don't really want to sit there and listen to the same dialogue over and over.  I just want to press F through the dialogue quickly.  If this feature were retired from future episodes I'd be quite happy :-)

The thing I noticed, playing through with my alts, is that for Eris Ezri, the newest alt who just has "basic" mission-based gear (none of the reputation gear), the amount of damage I do, and the healing abilities are not nearly close to what my other characters have.  This probably means that I have to grind at least through one reputation to get some gear at some point. I didn't bother grinding through the reputation for gear this time around on any of my characters. They are all level 5 in the Iconian reputation, so I got the traits, but the gear seemed to be a little too far.  I would probably grind through one character for the gear if the other characters were able to get it for free (or significantly less grinding), but as it stands, I have better ways to spend my game time :-)

Do you play Star Trek Online? What did you think?
Ο Φοβερός
See Older Posts...