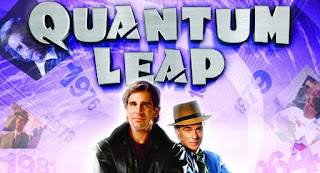 Recently I finished watching the show Quantum Leap. The show ran from 1989 to 1993, which means that I barely missed it when I returned to the US, and no television channel was showing it in Greece prior to that. However, it was one of those shows that was referenced by the teachers when I was in high school, and by others in general society. This means that I also missed any references made to that show.  When Star Trek: Enterprise came out people thought that I would be excited that Scott Bakula was the new captain because they assumed I was a quantum leap fan. Oh well.  Thanks to Netflix and Hulu I watched this without too much hassle. ;-)

So, for those who have not watched this show here's a brief synopsis and some spoilers:  The story is one of a time traveler, Dr. Sam Beckett, who works for some secret government project called Quantum Leap.  He's devised a a method of traveling back into the past within one's own lifetime.  The government is going to shut down the project so he jumps into the machine and off he leaps!  This story is reminiscent of past shows (Dr. Who) and future shows (Sliders).  Just like sliders, there is only one small project.  The guy can't get home! And, unlike Marty McFly, he is not himself when he is back in the past, but rather he leaps into the bodies of other people, and their consciousness leaps into his body in the future (which is end of 1990s to early 2000s).  Why does he body-snatch?  Well, he's there to right wrongs, so maybe it's fate, maybe it's God, maybe it' something else.  Due to the effects of the leaping process he can't remember a ton about the future or about himself at times, but that's when his friend Al(bert) is able to interact with him from the future in the form of an invisible hologram, well invisible to everyone but Sam.

The show ran five seasons and each episode, after the people in the episode had been saved, ended with Sam leaping into another body and setting up the next episode, with the signature phrase "oh boy!" (this is one of those things that I think was "there" in the mid-90s as a reference to this show that I never got...)  The conception of futuristic clothes, even clothes half a decade to a decade away, is pretty funny. The clothes that people "in the future" wore seemed a lot like 1980s club wear.

The people that Sam leaped into seemed to be pretty diverse in race, ethnicity, gender, background, and so on. It was interesting to see a privileged white man walking a mile in other people's shoes.  Sam seemed to be progressive, so it's not like it was complete culture shock for him when he leaped into bodies that were not similar to his, but still it was something that was not 'usual' for TV sci-fi at the time (even now I don't think we see it a lot).

I started watching this on Hulu (for free, before the first two seasons left Hulu), then I moved onto Netflix to finish off. At the time I didn't have a Hulu subscription.  On netflix, I discovered later that, they don't have all episodes.  Each season is missing 2-4 episodes which makes for that signature setting up of the next episode a little off since there is that gap.  I sort of figured that the writers and directors wanted to go in a different direction when I was watching, but then I noticed that Hulu had all episodes (and wikipedia was listing more episodes than netflix had...booo!)  Anyway.  I hopped onto Hulu to watch the series finale.

Overall the TV series was quite interesting and we got to see a lot of social commentary from our own era, well - at least a North American context since Sam can only leap into events of his own lifetime (which the writers f*cked up on by having him leap into the civil war era, in his own great grandfather's body, to woo his would be grandmother...but anyway).  The finale, however, was quite disappointing.  I was hoping that Sam would just leap back into the future and they'd live happily ever after.  Well...that's not quite how it worked.   See, Sam leaps back as himself to 1958 on the exact date and time of his birth.  He leaps into a coal mining town and he starts talking to a barkeep (another Al).

While this predates Stargate SG1 by a lot, all I could think of is "wtf?" This was a lot like that time when Daniel Jackson was dead and he was in some sort of celestial construct with Ancients, and among them Anubis, and Daniel needed to figure out what was happening.  So was Sam dead?  Who was this Al guy who was a barkeep?  And why where there people in this episode with familiar faces, but they weren't who we saw them in previous episodes? Was Al another leaper? God? Fate personified?  Al tells Sam that he can control the leaps himself, that his leaps aren't random and that he can take control of his destiny. He can leap home anytime he wants but he wants has some sort of destiny to right wrongs, so while he can take a break (sabbatical was mentioned on the show) he's be back.

Well, what does Sam do?  Sam goes back to right a wrong for his friend (future Al).  You see in one of his leaps Sam came in contact with Al's then fiance.  Al, however was a POW in Vietnam and presumed dead, so Beth remarried, and when Al came back, having lost the love of his life, ended up in a whole bunch of failed marriages (something we hear about throughout the 4 seasons) and he is a serial womanizer. Through seeing Al torn when he sees Beth again, to a consult with the Dr. Ruth (yeah, in season 5 Sam leaps into Dr. Ruth, so Al has an opportunity to speak to her for some therapy), the dots are connected and in order to make sure that Al is happy, Sam leaps back to the past (as himself now it seems) to let Beth know that Al is alive and that he is coming back is Ruth is patient. The screen fades to black and tells us Beth and Al get together, they have kids and grand kids, and...


On the one hand it was a very romantic thing to see on valentines day (saw the final episode last Sunday), but WTF?  Is Sam dead?  Is he now leaping saving more lives and righting wrongs?  Does Sam never exist because he's changed so many thing in this reality through time travel that he somehow wrote himself out of history by changing everything that he did?  It was a bittersweet ending, and it didn't really scratch the itch for a satisfying series finale.  I am happy for Al, but the protagonist is left hanging... Not cool Belisario! Not cool!

Did you watch the show? What did you think?  Now that I know the end, I am reluctant to go back and watch the episodes that weren't on netflix :-/ . Some other commentary on the show here, and here.