Star Trek Renegades, episode 1 is out! 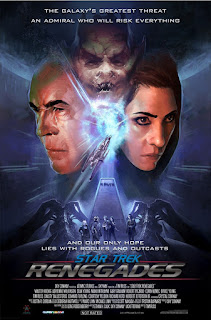 After the long wait, the first episode of Star Trek Renegades is out!  Since it's an hour and a half pilot it should probably be considered episodes 1 and 2, but whatever :-)  I originally expected this to be out last December, but it seems that the deadlines kept falling back.

I actually have not seen the finished episode yet.  I was a backer of the project so I got a link to the pre-final version where some of the vFX needed to still be worked on, but the plot was obviously there, so I had a chance to see it before it became public on youtube.  I've been waiting a while to comment on it because I didn't want to spoil it for people who did not get it early, so here is an opportunity!

I would say that the plot is rather interesting but the grittiness seems to cross-over into campy sometimes.  I do like the idea of a more clandestine story to star trek, after all there probably are people that work in the shadows and not everyone in Starfleet is a galactic boyscout, but the execution left something to be desired.  That said, I don't think the film is bad at all - all pilot episodes of Star Trek, even the television produced ones didn't really pique my complete interest in a "OMG this is F8CK!NG amazing" way. The true strength of star trek is story telling and character development, which is really more of a long term game. Pew-pews are nice, but they are not the end-all-be-all of trek (hmm... wonder what a Michael Bay Trek would be like...).

In any case, my big question from this story is this: what's up with the cuneiform writing on that device they found?  I know that this is a language geek thing, but you can't just throw up cuneiform (a very human script) and not explain it.  Perhaps this will be explained in future episodes.

I hope we see more of Corin Nemec in future episodes. I liked him in Stargate SG-1, and I think he makes for a good Starfleet captain. His ship, the USS Archer, was also a pretty nifty federation ship design.

One thing that bugged the hell out of me is the appropriation of the doctor's (from Voyager) mobile holo-emitter for use by this rag-tag crew.  I really like the the character of the doctor, not necessarily Zimmerman - the man who the doctor is modeled on, but the doctor himself.  I think he's proven himself to be a valuable crewmate, as much as any organic lifeforms anyway, and in Voyager I saw the mobile emitter as his property, not the property of Starfleet. So taking it and using it to keep the consciousness of some kid alive, while noble, seems to really dis the doctor.  This is something I'd love to see explained and addressed in a future episode.

Speaking of future episodes, the plan to pitch this to CBS seems to have fallen through.  This wasn't surprising, and it was really predicted by Alec Peters (of Star Trek Axanar) since CBS and Paramount seem to not want trek on TV at the moment (at least a Trek that they fund).  The Renegades crew will be crowdfunding two more episodes, which is pretty nifty. I hope this goes through. It would be great to see a successful crowdfunded web-series of this caliper on the web.