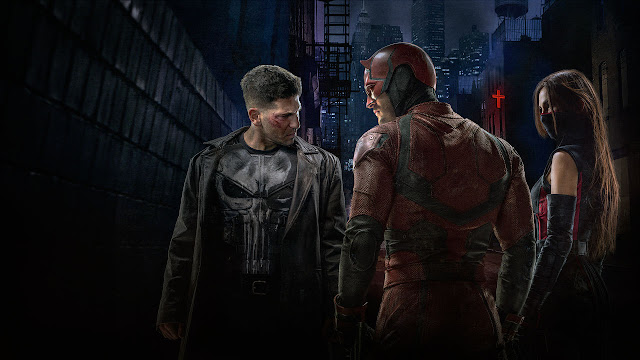 The other day I finished off watching Daredevil season 2 on Netflix.  I managed to steer clear of all of the spoilers  from friends and acquaintances on facebook talking about this.   In season 1 the main introductions (as far as super heroes and super villains go) were the Daredevil and the Kingpin.  This time around we were introduced to the Punisher, and got his backstory, and Electra.  I think we got some of the back story for both of these new characters, but there is probably a lot more to be said in future seasons (or in a spin-off series, which I think it's where the Punisher is headed).

Now that I've seen the entire season, I am actually wondering what the intent was with the Punisher. From my own previous exposure (mostly super hero cartoons in the 90s and video games on 8 and 16 bit systems), I knew that the Punisher was ultimately a good guy - despite his methods. I am wondering if at the end, when he helps the daredevil in the final battle on the rooftop if that was meant to be some sort of "we don't agree but we're on the same side" acknowledgement for people who are newer to the franchise.  I guess what I am wondering is this: were the writers and director trying to make him look like a bad guy initially (sort of like Fisk, who claims he wanted what was good for the city, but ultimately was a villain), but redeem him in the end (unlike Fisk).

In this season the Foggy, Karen, Matt trinity was broken up.  I am wondering when those three will make up and get the band back together.  Speaking of Electra - some back story was given, but I think that it needs way more fleshing out than it was given in this season. With her coming back to life (Nanda Parbat style) - or at least hinting that way at the end of the season, I think it will be interesting to learn more of her back story.

I think thus far in the series, one of my favorite secondary characters is Melvin Potter. This is the guy who makes all of the armor and weapons for the daredevil (and apparently his crime-fighting friends).  I just love how much excitement he has for his craft.

So, what did you think of this season?
Ο Φοβερός
See Older Posts...