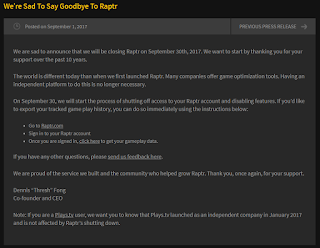 Well, in a couple of weeks Raptr is pulling the plug on the video-game social network which originally aimed to bring together a more unified view of gamers by allowing people to track the amount of time they put into playing games, showing off their achievements outside of closed and platform-specific views, and bringing people who play similar games together.  I actually liked this quite a lot because I could track my PC game playing time, my xbox achievements, things from my PSP, and so on.  It actually pulled in achievements (for quite some time) from a variety of networks, so you ended up having a gamer score for specific games, and in aggregate.

I guess technology changes made it not possible to continue down this road, and some gaming achievement systems (like Apple's gameroom) didn't have hooks for external services like this one, so it was harder to track time and achievements on those games.  They did pivot to game optimization as their main focus, but that's where they lost me, since most of the games I play need to play on a Surface Pro 3 (and most are old).  Well, I guess it's Adieu Raptr.  It was good to have you while you lasted :-)

Here is what my profile looked like near the end: 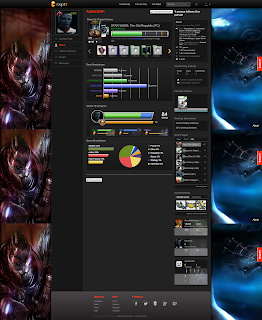