From the archive: the Apple iWalk

I love being reminded of rumors from yesteryear :-)  Back in the early 2000s there was a site called SpyMac which, as the name suggest, was a website that posted rumors about upcoming Apple products. I think that it also encouraged people to submit spyshots of new products, and hence potentially break their NDA.  The site no longer exists, but we still have some interesting fakes around thanks to it, and other websites that reported on it.

The original iPod, aka iPod classic, was released in 2001 and due to its syncing capability (one-way sync of contacts and calendar) people saw the potential for an Apple branded PDA.  Some of the specs that were floating around at the time were: a512×256 65k color TFT screen, 128-256 MB memory, FireWire and 56K modem built-in, a lithium-Ion battery (20 hours uptime), a scaled down OS-X operating system. 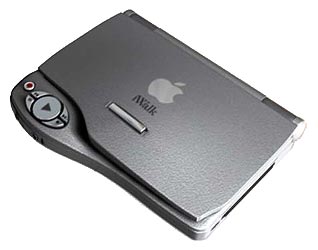 There were a couple of mockups on the web.  The one above, which tied in some hardware playback buttons for the audio components (and I assume any video it could play), and a flip up screen protector.  From the look of it, this was meant to the used on the landscape orientation. This mockup (from the images I remember, but can't seem to find online) was a color screen. 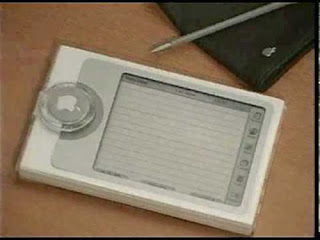 Another mockup, and subsequent fake video shows an OS that looks a lot like a descendant of the Apple Newton. It has a monochrome display and it looks a lot like the Microsoft Zune in hardware design (way before the Zune was on the horizon, I think).

Interesting stuff.  I wonder what the unreleased Apple PDAs look like.  There must be an awesome museum of tech-that-never-was at Apple HQ :-)