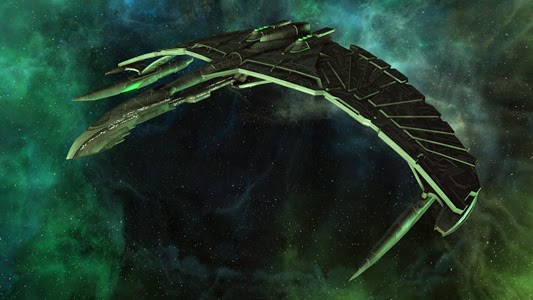 With 2014 coming to a close, with little room to grow in my Star Trek Online ship inventory, and with several ships (Tier 5 Upgrade and Tier 6), like the Sarr Theln Breen ship, I thought it would be a good idea to go through my inventory and clean things out a bit. I was keeping a number of ships around in a just in case I want to use them again fashion, but the truth is they are a bit underpowered for end-game content...so off they went.  I focused on every ship that was not able to receive a T5U upgrade. Specifically this is what I cleared out of my inventory:

Federation ships:
Romulan Ships:
Klingon Ships:
This leaves me with 5 empty ship slots in each character to experiment with more ships and to claim any freebies that may come down the road. I am actually also considering getting rid of some more Klingon ships (that I don't use often), depending on how much inventory I've got free to store rare consoles. Also, potentially on the chopping block is my Caitian Atrox. I rarely use it at the moment and I can always reclaim it from the C-Store.  At times like these I wonder how many playable ships other players have in Star Trek Online, and how often they really use them.  As a side note, I don't particularly get why some people have some many alternate characters. Leveling three characters up is enough for me ;-)
Ο Φοβερός
See Older Posts...