My Newton beats your iPhone! 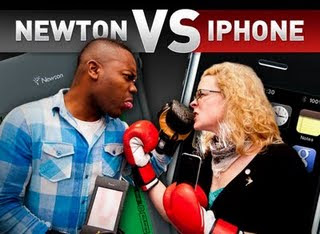 While I was focusing my free time on my studies these past couple of weeks, CNET found an opportunity to do another death match between two devices, this time the Apple Newton 2100 (the top of the line Newton, and the one that I happen to have), versus the iPhone 3GS (also a device that I have and use daily). The winner, according to CNET is the Newton. While I agree that the Newton is a great device, I can't really see it as a Winner.

Here are some breakdowns:

Design Category: CNET winner - Newton.
My take? It's a draw. I think that both from a UI design and from a hardware design, both devices have pros and cons. I couldn't pick a clear winner because each device was created with a certain audience in mind. The Newton was the UMPC of its day, while the iPhone is meant to be a smartphone. It's like trying to compare a mini-van with a pick-up truck.

Screen Category: CNET winner - iPhone.
OK, here I agree, the iPhone screen is great! Of course there is something nostalgic about that Green Newton Screen - however I don't think that newer generations share my nostalgia.

Apps Category: CNET winner - iPhone.
Here I am a bit conflicted. If you are looking for sheer number of applications available, then the iPhone is the winner. If you are looking for a more open environment, the Newton is the winner. I really don't care that there are a lot of apps available if there are many stupid fart apps or tip calculators. What matters is quality, not quantity. In addition, the fact that I can't use Google Voice on my iPhone is really annoying. On the other hand, I do get a lot of free games on my iPhone (freeappalert.com), and Newton development has really ceased to exist - so not so much going on on that front.


Reliability Category: CNET winner - Newton.
The newton wins this because it's taken a few tumbles and survived and it runs on AA batteries which you can replace, while the iPhone has a built-in battery. A number of years ago I would have been swayed by this argument, but at this point my iPod Touch has taken a tumble and still works great, I've seen iPhones abused and still working, and if my Newton takes a tumble and breaks I am sh*t outta luck. On the other hand my iPhone is completely backed up on my mac so if I destroy it I can get another one fairly cheap and just restore my data. Newtons are slowly disappearing off the face of the planet.
Reliability for me: iPhone.

Connectivity Category: CNET winner - Newton.
CNET gives this one to the Newton, but I have to disagree. Yes the Newton has two PCMCIA slots which you can add bluetooth and wifi (in addition to the IrDA port and the serial connector), however WiFi really sucks the battery dry, which would negate the reliability win above. In addition software is a bit of an issue. There is an RSS reader, and a web browser, and mail software, but the browser is really antiquated at this point. How much stuff can you really do online on the Newton when compared to the iPhone?
In addition, while some great Newton programmers have done wonders in adding new hardware to the Newton, the WiFi is limited to 802.11b, without WPA. No advanced drivers exist. You can add a GPS PCMCIA card, but there is no updated software. On the other hand, as crippled as some of the connections on the iPhone may be, it has 2G/3G connection everywhere I go, I can use the bluetooth (albeit in a limited fashion) and I can connect to FM tuners via cable to play audio over FM in my car.
The best connectivity is the connectivity that you can use, not the theoretical connectivity. Winner, as far as I am concerned - the iPhone.

Special Powers Category: CNET winner - Newton.
I guess if you look at the Newton in a historical context, yes it blew competitors out of the water with all of the great innovations it offered. The iPhone in contrast is quite tame and pedestrian. If you compare today's usage in both platforms...well I don't really care. Just give it to the Newton.


So who is the overall winner? Personally I would say the iPhone, if you are looking at day to day use. If you are comparing hardware and software within a historical context, I would say the Newton, but we're not doing that. Are we?
Ο Φοβερός
See Older Posts...