Legacy of Romulus coming our way!

OK, so this may be a bit of old news, but I am just getting to it now :) There is a new expansion coming to the Star Trek Online MMO which will feature the romulans as a faction that players can play. No much is known yet, but the developers have put up an Q&A blog post that has been quite informative.

What I am hoping for is some new content.  I ground through the Federation missions to get my Federation Captain to level 5 (plus level 5 on STF and Romulan fronts), and I am currently grinding to get my Klingon character to level 5 on STF and Romulan fronts (half way there! woot!) The last thing I want to do is play the same (or similar) missions as a romulan. I am looking forward to having a Romulan D'deridex, and my character is doing to be a Romulan (not a Reman) Scientist (since my federation character is a tactician and the klingon character is an engineer).

The only #fail for me...the pack is coming out when I am going on vacation, so I won't get to it until a month after it comes out :) 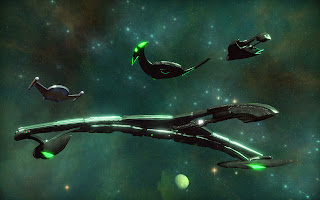