I wasn't quite sure if I should write this post in English or in Greek.  I've been focusing my #metanastis posts in Greek as I have been recalling my experiences as a reverse immigrant back to the US.  Most things deal with acculturation, school, things that were different, new, or peculiar to me at the time.  One of the things that I really liked was gadgets...however I tend to write about those in English in general, so I think this small series of posts on vintage gadgets will be in English, and some will be pertinent to #metanastis.  Who knows. I might just translate and post two versions later on.

In any case,  back in the day, when I was in high school, I consider myself lucky to have been a teen at a time where there was so much variety in operating systems and gadgets.  Today we tend to have Apple, Android, and perhaps Windows Phone.  Back then we had much more of a plethora of devices, shapes, sizes, and capabilities, which posed a problem in some sense - the interoperability sense, however interoperability wasn't really as big of an issue back then (or it didn't seem like it)


Back then, one of the devices that had caught my eye was the Sharp Zaurus ZR series of PDAs.  PDAs were new back then, and I think that they were originally sold as electronic organizers and not as PDAs.  I think one of the apple people coined the term PDA (something to fact check before I write my next post in this series).  Next to my my dad's work there was a two-level Staples store (office supplies store) which also had computers and electronics of this sort.  I probably spend a lot of time ogling at PDAs with 320*480 black and white screens that has 2 megabytes of RAM (ooooh! 2MB!)  I was also impressed that I could send and receive faxes with these gadgets, nevermind that I was a high school students with not need to send and receive faxes. One revolutionary thing at that time was that the screen on this thing was a touchscreen. Quite rudimentary, but it was still enough to provide a sense of awe for a computer geek in high school :-)

Needless to say that my dad never bought me one of these, even when Lechmere was having their going-out-of-business sales everything I wanted - like this the Panasonic 3DO, the Atari Jaguar, and even the original playstation at the time were too expensive for what we had. 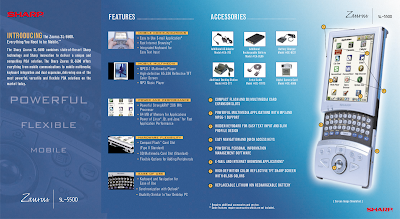 When I was off to college Sharp released an update to the series, which was meant to compete with the Windows Mobile based PDAs that Compaq (remember them?) Dell,  and others were releasing.  They jettisoned their proprietary OS and they went with their own version of Linux.  The result was the SL series (which I think was the last series to be produced).  This model had a flip down panel that revealed a keyboard, it ran on linux, so it presumably appealed to the DIY people, it had a 400 Mhz processor, 64MB of RAM, it played multimedia (ooooh!).  While I liked the form-factor of this PDA, I really didn't care much for the linux.  Even back then the killer app was really the applications, and most of the applications were either for Windows Mobile, or for PalmOS.  I ended up getting a PalmOS device - but I guess I'll get to that in a few years when I get to the "college years" in my #metanastis series.