I received this month's lootcrate last night (woohoo!) and the physical goods were pretty cool.  A planet express ship model, star trek decals, a comic book for 4001 AD (not sure what it is, so I guess I'll need to read it) and some Rick & Morty stuff (which again, not familiar with the series, but considering I've received Rick & Morty gear before, I might need to check out the series). 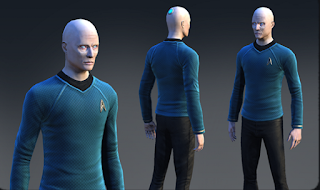 Recently, Lootcrate has also been doing digital look every month. A couple of months ago they has some Neverwinter loot (another Cryptic MMORPG property), which I kept stashed in case I want to start that game.  This month, however, there was something Star Trek Online related (woohoo!). The description (in the lootcrate magazine) is a Starfleet Admiral's commission. The promotional create, in game, contains:
Pretty cool!  It seems more geared toward a new player since some of the items are really of use to  entry level players as they level up.  It's too bad I didn't claim this pack on my TOS faction who is low level at the moment (gave it to my Delta recruit) oh well... At least the 1701 and the Andromeda are claimable in a separate manner, so they are not tied to my Delta recruit.