Well, this game didn't take all that long to complete the campaign side of the game!  What do I do in-between class stuff? Obviously play games ;-)  This was my first foray into a Battlefield game. Even though I have Battlefield 3 and 4, I was intrigued by the cop mechanic where you can arrest people instead of blowing them to bits, which really gave you an incentive to play the game in stealth mode, play it safe, and try to get as many arrests as possible.  It seems that I arrested so many criminals that I maxed out my expertise (level 15) at about 3/4 into the game.

Anyway, the game starts with you being transferred from one prison to another.  It seems that you are a corrupt cop. Then, flashback to three years ago when you were in the force to explore how you got there.  It turns out that you are not bent, but rather you were framed! The second half of the game is about you getting even with the people that put you there, including your former captain, who is pretty bent.  At the end of the game you take out your old captain, but I guess he saw something in you that made him think that you would be his heir, once you killed him of course.  At the end of the game you are left with the knowledge that there is a while network of corrupt cops at all levels out there, and you are left with a giant vault's worth of gold bars, cash, and jewelry.  What are you to do? (and scene!) 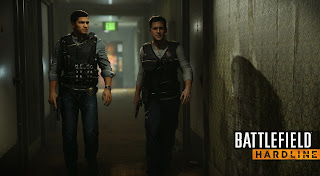 The game play seemed pretty standard for a first person shooter, with the exception of the "freeze!" and arrest mechanic.

Have you played this? What do you think?
Ο Φοβερός
See Older Posts...