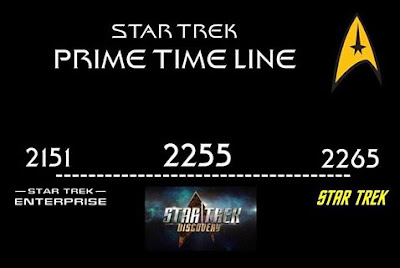 This past week the rumor, or leak, is that the new Star Trek series (Discovery) will take place 100 years after Enterprise, and 10 years before the original series.  I've seen a lot of  "bah! humbug"-ing in the various facebook Trek groups I follow (mostly because of fan films).  It seems that most people would prefer something set in the post-Voyager and post-Nemesis era, which I get.  Had I not started reading the Titan novels, which are about Riker's captaincy, and the associated cross-over series Destiny, Typhon Pact, and The Fall, I would be inclined to agree. However, given the trend of using novels and comic book stories and adapting them to television or film I think that they (CBS) would be shooting themselves in the foot if they decided to make something in the 2370s.

There doesn't seem to be that (in terms of story) much written in the 2250s which makes it a prime candidate for new story telling, and it can bridge Enterprise to TOS. Later, if they are so inclined, they can 'reboot' TNG and DS9 (by picking up where the series left off in their finales) and start working on bringing other novelizations (such as New Frontier) to life on the screen. It would be pretty hard to do this now, considering that the original actors don't look like they did during their finales, but  give it another 10 years (assuming that Discovery runs for at least 5) and then we can explore the time between TOS and TNG, and post Nemesis (with new actors) since by that time Chris Pine will be old enough to play Kirk in that age (post TOS) and they can recast Picard with a new actor.  Just a theory