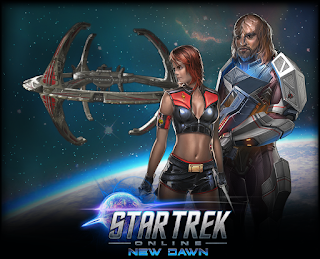 Kinda stinks to be both sick and have a ton of homework when new content arrives for games that you like to play, but oh well - such is life :)  This past week Season 11 of Star Trek Online was released with new exploratory content, previous chapter revamps, a new reputation system, and some new PvE queues.  I haven't had much time to dive in to play, but I did get some chance to go in and have a look, and start earning reputation on my main character (alts will have to wait a while).

When I logged in I saw a featured episode, sunrise, which gets you out into the Alpha quadrant seeking out new life and new civilizations (and being boldly attacked by Tholians when doing so).   I liked the new featured episode, and now that I've seen this time-gated format - where new episodes have 3-4 weeks run before a new episode drops,  I have to say that I like this format!  It allows you to not have to binge-play, and hence it gives the player the feeling that you don't have to keep up wit the Jones (or would that be Keeping Up with the Cardassians? ;-) )

Along with the featured episode, there was a prompt to do a couple of missions that were Cardassian and Bajoran in nature.  I started playing those when I realized that I was playing the re-vamped Cardassian Struggle story arc.   I played a fair bit of it (2/3 episodes) before I put the brakes on it and decided to go back to homework.  The revamped Cardassian Struggle seems pretty nice.  A lot of the old episodes seems like filler, which made the previous story line feel like you were just slogging through. The revamp seem quite nice!

I tried one of the PvE queues, called Counterpoint, where your team needs to defend DS9 from Mirror Incursions, and (spoiler) attack Terok Nor (aka mirror DS9) when it comes through to the prime dimension.  One of the things I've seen on reddit is complaining that the marks rewards are pretty pathetic - and I agree.  Most times I've played I've received around 75 marks (which includes the daily bonus).  I've made the decision that I will only play this to get to Tier 5 reputation on the Terran Reputation system and call it a day.

Playing once a day for 75 marks isn't bad, but trying to PUG this and playing it multiple times per day to get marks for the gear  means that as a player you'd be spending most of your time sitting and playing this game (and I've got other things to do in life).  I wish things were like they were when I started to play: The Borg Infected Conduit PvW would give you 100 marks each time you played.  You could play it several times per day (since a good team would get you though in about 10 minutes) and you could relatively painlessly get some gear.  Since Delta Rising getting marks is a painful grind.  Oh well.

Finally, the Admiralty system is new!  You can now send your ships on Doff missions!  While this might now seem very exciting, it is a way of getting XP - which means quicker ways of getting skill token to fill up that skill tree! (woot!).  Supposedly there is a dry dock somewhere, but I have not found it yet.

Well, initial impressions of New Dawn are pretty good! It's disappointing that I will most likely not have the gear from the Terran reputation due to the grind - but from a story perspective and things to do in game, this expansion is a good one :)
Ο Φοβερός
See Older Posts...