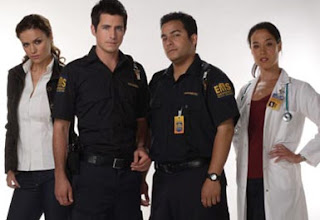 For the past number of weeks I've been watching a new Canadian series called The Listener. Luckily NBC picked it up and it's now available on broadcast and on Hulu. The story reminds me a bit of the pretender - without so much of the chasing to get the main character back into an asylum (or whatever that center was).

In any case, the main character is a paramedic with supernatural abilities - namely the ability to see what people are thinking. This helps him greatly in his job, but it also gets him tangled up with the police because he is such a nice guy that he wants to solve the crimes that lead to a person getting injured and him getting involved.

As the story progresses someone is indeed looking for Toby, the main character, back for what reason we don't know. Wikipedia says that the first season is only 13 episodes long. I hope there is a second season planned :-) The first couple of episodes were slow to start up, but they became more interesting as the series progressed.

Want a show to follow this summer? The listener is it! :-)
Ο Φοβερός
See Older Posts...