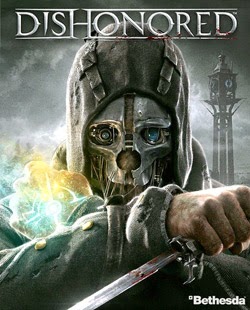 Just in time!  Right before my semester starts next week, and my gaming tanks until the summer, I was able to start playing, and finished, Dishonored.  This is one of those games that was a hand-me-down from a friend that moved away.  I tried playing it right after I had completed Bioshock Infinite, however the game styles were too similar and I wanted something else to buffer these two games.  Now that the Hitman Trilogy was done, it seemed like a good time to take on this game, and see if I could beat it before the semester started.

In the game you play the role of Corvo Attano.  You come back from some mission to meet the Empress, and your Princess, only to see the Empress killed, and the Princess abducted by what I would describe as paranormal ninjas (in the game they are called assassins).  Of course you are framed for the murder and thus your are dishonored.  This debut trailer does a good job at framing the story:

The game play in this trailer makes it look a little like it might be like Assassin's Creed, but it is not - it's more like Bioshock, which is fine by me.  Throughout the game you pick up bone charms which allow you to have some passive powers (like silent assassinations giving a chance to replenish your mana), and some active powers which drain mana, like stopping time and teleportation.  The game takes place in a Victorian, steampunk, world that is infested by something resembling the Plague.  The only difference is that those infected with the plague, after some level of exposure become like zombies.  That aspect of the story telling I could have taken or left it, I don't think it added much to the story.

At the heart of it, this game is really about a political coup d'etat, first perpetrated by the Lord Protector who stepped in after the Empress was assassinated, and then by your "friends" after you ended up taking the other Lord Protector out of the picture. When your friends betray you and take over the land, you need to go take out that trash too.   At the beginning of the game you are warned not take lives needlessly  otherwise it will impact the ending of the game.  Well, what can I say, I tried to keep the game in "low chaos", not get detected, not kill, but when all is said and done this was too much work.  I felt sorry for the red shirts that Corvo killed, but at the end of the day, gotta save the Princess!

The three different endings are covered in this YouTube video. The order is: "worst" ending, middle of the road ending, and best ending":

I ended up getting the middle of the road ending, which is still considered a "bad" ending.  This got me thinking about the subjective nature of what we consider good and bad endings.  I honestly thought that  the ending was fairly realistic:  History is written by the victors, through a specific lens, and while Corvo dies in the end, he is still Lord Protector to the new Empress.  The fact that Corvo dies at the end of this, instead of living, is in a sense giving him Kleos Afthiton, the never ending glory that the Ancient Greek Hero was all about.  He accomplished great deeds and people would be talking about him for days to come.  When living to old age he doesn't die in a glorious way.

All things considered the game play for this game was quite fun!  While I won't be going back to it right away, I think this is one of those games that I will be revisiting in the future. From an achievement perspective I only go 17/80 achievements (21%) but the game was a lot of fun - so I will probably go back in subsequent plays to rack up some more ;-)
Ο Φοβερός
See Older Posts...