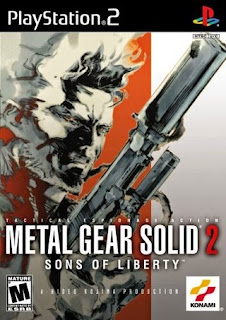 A few weeks ago I finally completed the last game in the Metal Gear HD Collection, and that game was Metal Gear 2: Sons of Liberty. I suppose that the HD collection also include Metal Gear, and Metal Gear 2: Snake's Revenge, but since you have to boot up MGS3 to play them I am not counting them as part of the "HD" collection.

Prior to playing it more recently, I had started playing MGS2 when it originally came out. A good friend of mine in Greece (Θ.Μ.) had a Playstation 2, and one of our favorite past-times was playing games in pass-the-controller style.  We had actually gotten quite far in the game when I had to quit playing it and head on over to the train terminal to head to Athens for my return flight to the US.  I didn't realize how far until now that I have completed the game.  Back then, in 2002, I was almost at the final boss before I stopped playing - D'oh!

In any case, the game starts off with Snake, but then for the vast majority of the game follows a new character character called Raiden.  Raiden is trying to prevent some crazy terrorist group for starting a war, and save the president of the US while he's at it.  The game keeps making reference to the fact that Raiden has had VR (virtual reality) training so he's prepared for such real life missions, but as Snake tells him, nothing prepared you for the real deal.  I guess the game, more than 10 years ago, foreshadowed what we see today with games such as America's Army, and drone operators. The game also had this undercurrent of media control, and the silencing of voices, government propaganda, and so on - which is pretty interesting to have in a game from 2001 considering that we are starting to hear about massive spying operations from leaked documents like those released by Edward Snowden. I guess life is imitating art.


The game was pretty interesting.  I was recently listening to an older retronauts episode where they were discussing the MGS series and MGS2 came up. It seems that people were pretty annoyed at this game when if first came out, that Raiden was essentially in a simulation and that this wasn't really a "real" mission.  I wonder if everything that has transpired since the game came out made it feel a little more "real" to me as compared to when the game first came out.   The only thing that I didn't like, but I eventually got used to was the mechanic of having to stop and push a shoulder button to aim.  I wouldn't really shoot a weapon while running which was frustrating.  I also didn't get any "real" ammo when the game started, but instead I got tranquilizer darts, which made for a confusing start of the game.  I know that this game is meant to be stealth action, but sometimes stealth doesn't work work me  - I'd prefer to be penalized in rankings and get through the story than try to force the stealth.  Eventually I got used to the mechanic of the game and I made my way through.

I don't even remember how many achievements I got because they are all lumped together for all 3 HD trilogy remakes.  I did get some final stats such as almost 13 hours of play-time, saved 52 times (I actually ran out of save spots!), and based on those save spots I saw that I started the game over 18 months form the time I finished it.  That took a longtime, and it was partly due to a rage quit over the game mechanics. 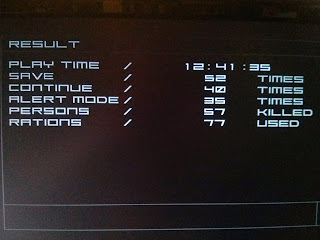 Overall, interesting game.  After an Assassin's Creed interlude, I think I will go to the Original Metal Gear and make my way through that trilogy.  Now if there were a way to play the original MGS on an xbox...