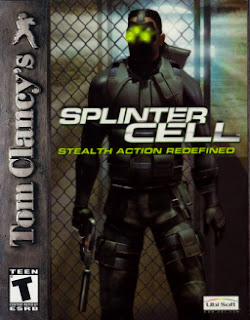 Damn it Fisher!  That's one alarm too many! The mission is over!  Recently I completed the original Splinter Cell - the game that kicked off the series - via backward compatibility on my xbox 360.  I've been wanting to go back and play these games to get the complete story arc of this game series, but on Windows you generally cannot find Pandora Tomorrow (or is it Chaos Theory?) because of some sort of software issue.  So...xbox games on the 360 it is!

Back in 2004 I actually bough this for my Mac. The game was ported over to the Mac by Aspyr.  I wasn't sure how much I'd remember of the game (if anything at all), but I was surprised at how much of it I did remember.  The Oil Rig level is the level that is most prominent in my mind.

So what's the story of the game?  (excerpt from wikipedia, edited): In April 2004, the President of Georgia is assassinated, allowing Georgian billionaire Kombayn Nikoladze to seize power with a bloodless coup d'état. In August 2004, former U.S. Navy SEAL officer and Gulf War veteran Sam Fisher is recruited by the National Security Agency to work within its newly formed division, "Third Echelon." Working with his old friend Irving Lambert (the one who keeps telling me how much I screwed up in one way or another), Fisher is introduced to technical expert Anna "Grim" Grimsdóttír, and field runner Vernon Wilkes Jr. In October 2004, Fisher is dispatched to Tbilisi, Georgia to investigate the disappearance of two CIA officers. Fisher attempts to meet an informant, Thomas Gurgenidze, only to find him dying in a burning building. Gurgenidze warns that one agent's transmission mentioned proof that could cause a war. Finding the agents' corpses in a police morgue, Fisher learns that a former Spetsnaz agent, Vyacheslav Grinko, removed their subdermal tracking implants. Tracking Grinko's license plate number using CCTV, Third Echelon tracks him to the Georgian Ministry of Defense. More detailed parts of the story can be found on the wikipedia article.  The story continues and takes place in Myanmar, a Chinese faction gets involved trying to start world war 3, there is a mole in the CIA, so Sam needs to infiltrate there and figure out where the mole, or infected computers, are, and he needs to take out  Nikoladze at the end.

The game, comparatively, has aged relatively well.  The video cutscenes do look quite fuzzy, and the graphics aren't really all that defined (compared to modern version of these games). I am not sure if this is the upscalling from SD to HD, but considering that there weren't a ton of cutscenes in the game it was fine.  The most annoying part (and most challenging) was the lack of resources at certain points in the game. In modern equivalents, when you take out an enemy, via lethal or non-lethal take downs, they usually have item drops (usually guns and ammo that they carry).  This offers a good replenishment of the supplies of the protagonist. In this game however not every NPC has drops.  Some do, and it's usually a USB stick with additional info to get you through the game (like door codes) and some do drop healing items (but I don't think I've gotten ammo). This means that you have to count your bullets carefully, and for items like non-lethal items (like shockers and sticky cameras) you need to be even more stingy because you might need them later. Another aspect of this game is the Stealth action. Yes, stealth is in the name, but in a game with guns do you really expect to play it stealthily? ;-)  Well, unless you area stealth you can win this game.

You also can't take out everything in your path because some people are needed alive to open doors, or to unlock retina scan equipped items (you can't even knock them unconscious...).  I was expecting this game to be easier (perhaps because I had played it in the past), but it did take me a while to get back into the groove of things.

Overall, despite the learning curve, I did enjoy this game I'd give it an 8/10 (accounting for its age and that it's already about 15 years old!). Now off to start the next one in the series.