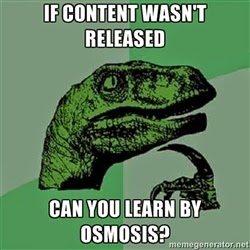 Alright, #MassiveTeaching (or under its official name: "Teaching Goes Massive: New Skills Need") on Coursera is over, that's all he wrote (and then deleted, and someone else recovered). All joking aside, I decided to participate in the final assignment/test of the course which ultimately turned out to be a Level 1 evaluation. I've included the three questions in my previous blog post about this. What I neglected to include in my previous blog post was a fourth question which went something like this: Would you recommend this course to someone else?

The requirement to "pass" the assessment was to grade 4 submissions. I ended up "Grading" 14 submission because I was really surprised at the results.

Of these 14 graded assignments, 8 of them were positive (57%) and these respondents claimed that they would, or have already recommended the course to their colleagues. One person commented that this course would be good for professional development and it was completed by them in mere hours. Another person got their previous professors "hooked" on this course (really?) The reasons for recommending the course are that learners felt that their peers would learn a lot about MOOCs, especially topics of pedagogy, copyright and technology. From a delivery point of view, others commented that they liked Paul-Olivier Dehaye's (few) videos (which were done in common craft style). One person would tentatively recommend the course to peers if Dehaye included more content for newbies.

Next up, of the 14 assignments I graded, 2 participants (14%) were unsure if they would recommend the course to peers. One response seemed to indicate that the whole drama around the course was a really a detractor, but there was a question about the efficacy of the course as an xMOOC. The respondent seemed to indicate that they got a lot out of the forum conversations and not Dehaye's work. The other response said that they liked MOOCs because they didn't have to structure their own learning, and the minimalism of this course was really not the format for them.

Finally, 4 of the 14 responses were negative (28%), in other words they would not recommend the course to their peers. The most common issue was the drama surrounding the course, and Dehaye's conduct. The interesting thing is that one of the respondent only learned materials through the videos, like going through some sort of OCW, which sharply contrasts with the comments another person made, in the unsure category, that stated that they only really learned something from the interactions.

Now this to me is interesting. Granted this is only a small cross-section of the responses but I was amazed at how positive the responses seemed to be overall. some people in the forums claim that they have graded over 40 to see what other said in their responses and they reported similar results. According to some sleuthing in the forums, there were 107 total responses to the final assignment. According to others the responses (yes/no recommendation) seem to be neck to neck depending on how you categories the responses. For instance do you could "yes only if..." as a "yes" or something else? What about responses like "your mileage may vary?"

From the 14 that I saw, it seemed to me that most people seemed to be new to MOOCs and as such had either no previous hands-on experience with MOOCs (only what they read in the press), or had minimal experience. This means, to some extent, that people's outlook on this #massiveteaching MOOC was predicated on three things:

At the end of the day it seems to me that Dehaye's experiment fell on deaf ears. If people weren't perturbed enough to not recommend these rogue tactics I am not sure what to make of learners. Are they sheep willing to follow anyone in a position of authority? Are they not paying attention (mental image of student facebooking during lecture)? Are they trying to make lemonade out of a lemon? I really don't know. And for Dehaye, was all this production and drama all for naught? Your thoughts?