Campus vs. Online: fighting in the family

Last week I was a virtual attendee at the annual Sloan-C conference. It was fun and educational enough to spend 3 days watching live streamed sessions, and a saturday catching up on some recorded ones. The recorded ones are not as fun since you don't have the twitter stream going :-)  In any case, I was watching the session on State Perspectives on Online Education and it seemed to me that there still is tension between the online side of the house and the face-to-face education side; namely that the f2f side doesn't want online to be "poaching"  "their" students, and in some cases refusing to share resources.  This was a major #facepalm moment for me because it's essentially two sides of the same organization fighting each other - which is really counter productive...so I tweeted:

Competition between online&f2f jeez!Can we get over it already &recognize that OL or f2f doesnt matter.Its just one campus! #aln2011

Which lead to a brief exchange online (read from bottom to top): 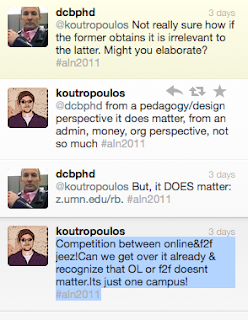 At that point it seemed a bit silly to try to elaborate on twitter, something that seems so long to elaborate.
The first thing that I should clarify (if my second tweet wasn't clear enough) was that this war between the f2f and the online sides of the campus doesn't matter from an administrative side.  Faculty and instructional designers should not be hired only to help with online or face to face - this seems like un-necessary duplication. It also seems like unnecessary duplication to have two cost centers for the two different units with two sets of managers - that's just a waste of money and resources.  Sure, pedagogy will be different in an online environment versus a face to face environment however the managerial structure should not have an affect on the pedagogy.
As such, universities should not have this type of infighting and consider some students online and other students face to face and the two shall never mix. What universities should be doing is to realize synergies* between the online and the face to face and go forth together; thus supporting and complementing each other rather than having this silly little fight over online versus face to face. It should be online and face to face.
* by the way, I have come to dislike such business jargon, but it is the only word that comes to mind!
Apostolos K. ("AK")
See Older Posts...