Invasive species, echo chambers, and community: This week on Rhizo15!

I was going for a News show feel with that title. I don't think it came across.  The more I think about it the more I am thinking that video might satiate my dramatic tendencies - but that would take more acting talent and more time.  It's just text for now! If you have an idea for a name for a Mock News Show (like the Daily Show but for EdTech, drop a comment ;-) )

So, week 5 Rhizo15 - this means that there is only one more week left if I am not mistaken. Dave talks about the doom and gloom of community. It's such an invasive species.  It assimilates all that it touches. Oh my!  Just to set the stage here Dave asks if community is just replacing one authority - the instructor - for another, which I would guess he means the Hegemony of the Group.  Is the course becoming an echo chamber?  Does the rhizome choke the air out of everything it touches?

I am pretty sure that Dave is being controversial here (surprised?) and possibly a little tongue in cheek. Generally speaking my guess would be that if I tried to "design" a course around rhizomatic principles my students would most likely mutiny. I am actually not even sure how one would "design rhizomatically"† anyway. That's a topic for another post I guess.  Even if we don't go full-rhizo on a course, and we work out the community aspect where the instructor steps back and lets the class take over, that doesn't mean that the power of the instructor (in a formal academic setting) isn't something on the minds of learners throughout the course (I think Maha wrote about this in Week 4).

Is group-think a potential problem in teamwork?  I think it is, but just because it's a potential problem it doesn't mean that we have an echo-chamber situation.  Some posts from previous weeks are bubbling up on twitter because some of us are only now getting to them and if we see something in them we like or identify with we share them, even though they came back a few weeks ago.  Since MOOCs are open entry, open exit, open re-entry (and so on), it's not out of the realm of possibilities that content will bubble up from time to time. I think this is a logical part of a course that does not have a linear structure. 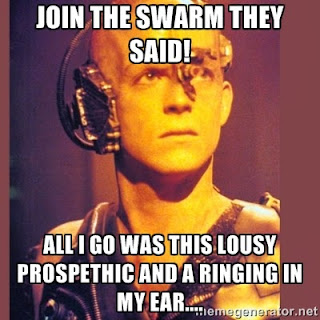 Still, the issue of the echo-chamber may persist.  The twitter SNA that Aras is kindly keeping track of seems to indicate more posts, but fewer people on twitter.  Is this a problem?  Well, maybe - or maybe not.  It depends on what the goal is.  The community is distributed in at least two social networks - facebook and twitter.  Three if you count the weekly Vialogues that are coming up‡. And some people might be just engaging on their own blogs without interacting with the rest of the community. Some members just do one network, others do both, others do all three, some blog on top of that.  I think that twitter-action is only one side of the coin and we can't base our interpretation of interactions in the course only on that metric.

Furthermore, there are other considerations.  It took me up to week 3 of #Rhizo15 to really get started. My EDDE802 course was still in session when Rhizo15 started so my attention was on something that would get me feedback on assignments and earn me a grade to allow me to go on to the next step of doctoral studies. I would have loved to have participated early on, but such is life.  I would assume that there are still others that were able to participate early on but may not be able to participate as much on this end of things.  Without bugging our 201 members on the facebook group (assuming that's an official count) for weekly temperature checks, how does one account for non-course priorities that affect course "performance"?  I also see 11 new members on the Rhizo group which means, to me anyway, that the membership is fluid and not fixed in time.

Now, are there groups of people that know each other from previous MOOCs (or online life in general) that tend to prioritize members of that group over others?  I don't doubt it!  To some extent people who you know from before have undergone a mental vetting process. You sort of know what you are going to get from them, so you might prioritize reading what they write over some other unknown.  Is this an echo chamber?  I would say no because they might not be parroting the same things you say or think (that would be boring in my mind anyway). I don't think that when new groups are formed you are out-with-the-old, in-with-the-new each time you have a new learning setting. Having a known point on the compass is a great start, but as learners we should aim to expand our horizons, and this means reading contributions from people we don't know. That is how our network expands.  By re-engaging with people we know we strengthen that social bond as well.  I guess, as Latour says in ANT, groups are constantly being formed and re-formed. There isn't just one group that stays as is in perpetuity.

SIDENOTES:
† If you do know or have an inkling on how to do instructional design for rhizomatic courses, and you want to submit an article for a forthcoming peer reviewed special issue of CIEE on the Instructional Design of MOOCs let me know!

‡ I guess I should try this at least once.  Maybe this week...

Independent side note: I don't think that community chokes the traditional because many people are still resistant to community and group learning.  Just dump knowledge in my head and test me on it - that's their motto ;-)
Apostolos K. ("AK")
See Older Posts...